SABC puts its treasurer and chief financial controller both on 'special leave' after they warn public broadcaster it will be out of cash by November. 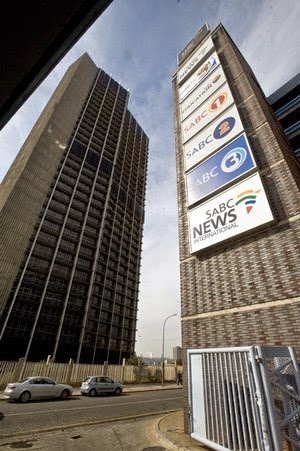 The SABC has summarily put both its treasurer and chief financial controller on "special leave" after they warned the SABC that it will be out of cash by November without intervention as the beleaguered public broadcaster has been bleeding hundreds of millions of rand monthly.

The Sunday Times reported that SABC treasurer Arrie Thomas and chief financial controller Petra Campher were both placed on special leave this past Wednesday.

With two of the SABC's top three financial executives gone, it leaves James Aguma as the chief financial officer (CFO).

Meanwhile the permanent but suspended CEO, Frans Matlala reportedly got a R18 million SABC payout as part of a golden handshake to go away.

Frans Matlala was appointed in November 2015 and got suspended after just four weeks, with the SABC and the SABC board unwilling to explain to the public exactly why the public broadcaster's highest ranking executive is gone.

After the SABC's chief operating officer (COO) Hlaudi Motsoeneng lied to parliament's portfolio committee on communications in April 2015 - saying that the SABC would make a profit after which the SABC posted a loss of R395 million a few months later - the SABC is once again on track to post another annual loss, this time likely in the region of R500 million.

In May Hlaudi Motsoeneng ordered an increase of 90% needletime for local South African music, announced an increase in the royalty payment fee percentage, ordered that all local TV content on the SABC's TV channels should immediately be increased to 90%, starting with SABC3.

He also announced that the SABC will roll out 4 new "language-based" TV channels that will cost the SABC R1 billion, while the SABC is struggling to adequately programme and fill its existing terrestrial TV channels that's awash in bad quality programming and numerous rebroadcasts and repeats.

The crisis-riddled SABC currently burns through roughly R600 million per month while what remains of the public broadcaster's gutted top executives and unstable SABC board came under fire with near universal harsh criticism over Hlaudi Motsoeneng's dramatic recent policy to censor public protest visuals on SABC TV News.

The South African broadcasting regulator, the Independent Communications Authority of South Africa (Icasa), ordered the SABC to stop censoring its public protest news coverage, backdated to 26 May, but Hlaudi Motsoeneng said last week "no-one is going to tell us what to do".

Meanwhile 8 suspended SABC reporters who oppose the SABC's new censorship decree and face disciplinary hearings, have lodged an urgent application straight to the Constitutional Court for their case to be heard there.
on 1:55:00 PM