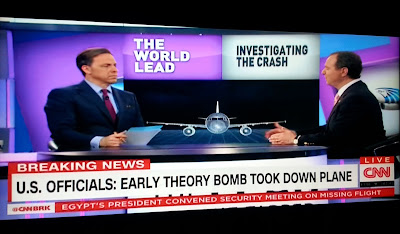 When EgyptAir flight MS804 went missing over the Mediterranean Sea on Thursday something else went missing: coverage of other international news, sport and business news coverage on CNN International (DStv 401).

While there's nothing wrong with covering a missing airplane, it becomes problematic when a TV news channel like CNN International starts to cover one story - almost exclusively - for so long and to the exclusion of other important news.

The CNN International feed switched to the CNN version seen in the United States that basically played like a real-time, live version of a National Geographic Channel Air Crash Investigation episode scenario-ed out.

Even Christiane Amanpour got into the act with an Amanpour devoted to the missing plane (interview details which were refuted and backtracked by the Egyptian government two hours later - basically a missing and wasted half hour of my life that I will never get back.)

After a short Hillary Clinton interview (also taken from CNN in America) that unprofessionally ran over and was abruptly cut short, viewers were then once again returned to missing plane speculation coverage.

While other channels like Sky News (DStv 402) also covered the missing EgyptAir flight MS804, they didn't do so for literally hours at the cost of dropping other news and they balanced it with the day's "normal" offering of various other news events.

it felt as if CNN International (and by implication CNN in America which is basically what CNN International became) unlike the other TV news channels somehow lost all perspective and turned into the "missing airplane channel".

Why does CNN International believe that global viewers want to see so much - and unconfirmed, unending speculation - around one missing plane story?

And who is it who makes this decision? Because it's definitely somewhere, somebody specific, who decided to dump other coverage of other news at the expense of this one specific story.

I love watching television, especially TV news, and tracking various TV channels and what's on them. You really have to go low to bore me to the point where I can't watch a TV channel and not find something that I see and wonder about or that keeps my interest.

However, by the time I feel I cannot keep watching anymore and must change to another channel because of the soul-deadening and repetitive lack of anything new or worthwhile, then it's bad - and that's what happened on Thursday with CNN International's missing EgyptAir flight coverage.

One thing I'm thankful for and that international viewers of CNN can be grateful for however is that CNN International is actually a way better, more balanced, and more nuanced channel than the CNN that American viewers are clearly being "subjected" to.

You don't realise that until you're suddenly forced to watch for hours the speculative chatter and almost pseudo-hype news, bad closed-ended questions ("yes/no" questions) and mindless, bad "experts" that's apparently the CNN version of the United States.

I feel bad for people (in America) who think they're watching news but have to make do with something like The Lead with Jake Tapper that CNN International viewers are occasionally exposed to as happened again on Thursday.

My take-away today was that the CNN version in America has a lot less substance and is filled with a lot more "posturing" - imagine a lot more Wolf-type coverage than International Desk type news.

Does CNN want to condition global viewers than when something happens to an airplane that it's now the de facto "missing / downed / crashed airplane channel"? Who knows?

All I know from watching on Thursday is that what was on CNN International with the missing EgyptAir MS804 was too much.

CNN also had too much of too little: too little information constantly regurgitated, too few actual facts, too much bad CNN America, too much "if's" and "may's" and "likely's" and too many garish red "breaking news" bumper break-in's for trivia titbits what wasn't nearly "breaking news" at all.
on 11:52:00 PM