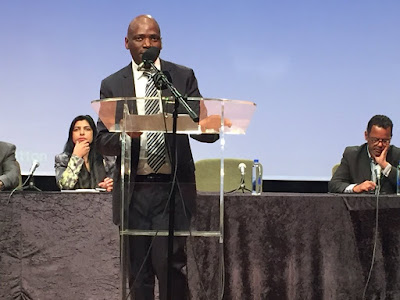 The SABC's chief operating officer (COO) Hlaudi Motsoeneng on Tuesday announced a concerted drive to rid the public broadcaster's TV channels of its remaining international content, saying that the 90% local content quota announced for radio will now be extended to its TV channels.

The SABC will start with an 80% local content makeover for SABC3 from 1 July.

The change for SABC3 comes just three months after the SABC in February announced changes for SABC3 and its other two TV channels. It's not clear why the SABC made a big announcement three months ago, only to announce yet another round of wholesale changes at the end of May.

While no SABC3 schedule for July was released, the move looks ominous for viewers who tune in for international content on the SABC's only commercial TV station where long running weekday soaps like The Bold and the Beautiful and Days of Our Lives are the number one and number three most watched shows on the channel above local fare like Isidingo, High Rollers and Top Billing.

The expected move is also likely to prompt commercial broadcasters like M-Net and e.tv to pounce and snap up popular international fare like Survivor, The Amazing Race and some of the last remaining international series still on the SABC3 schedule that the SABC might be doing away with.

The SABC TV announcement and the 80% local content quota for SABC3 comes comes three weeks after Hlaudi Motsoeneng's edict of 90% needletime for local music on the SABC's radio stations.

The announcement follows Hlaudi Motsoeneng's announcement earlier this month that the SABC will start an additional four "language-based" TV channels at a cost of R2 billion - R500 million per channel.

The SABC will be adding 27 emerging producers to make new shows for the SABC's TV channels with celebrities like the fired Generations stars Sophie Ndaba and Winnie Mashaba coming back to the public broadcaster as producers, as well as Khanyi Mbau whose hit e.tv talk show Katch It with Khanyi was cancelled.

Verona Duwarkah said SABC3 could even see 100% local content in the future.

"At the moment the talent that we introduced today is for the current channels largely for SABC3 because that is where we want to revamp the schedule to more local content. Half the schedule is about local content already".

Hlaudi Motsoeneng said: "The team that I work with, they should walk like me and talk like me - that is what I am expecting from them".

Hlaudi Motsoeneng said: "We have given instructions. The how is not my business. From July 1 we should see a different SABC. I think it's achievable. We are going to get rid of content that is no longer working for SABC3. There is no way that it can't happen, it's happening".

"When you come to me I will respond now. If you impress me it's 'yes'. If not, it's 'no' and you should know not to come back," Hlaudi Motsoeneng said.

Hlaudi Motsoeneng told producers that "I'm also aware some of people are taking chance. You need to give us quality content.You need to give us content that we able to attract an audience. And if we don't attract audience there's no reason why we should keep such content on our platform."

"Make sure when you do business with us, you give us quality. But it's also important that you have Venda dramas, soapies and so on and so on. Afrikaans also. And other different languages."

"When we think, we think about English. When we talk we talk English. I don't understand why most people will write dramas and soapies in English. But I think we have to be proud about our own African languages."
on 3:43:00 PM