SABC boss Hlaudi Motsoeneng in his purple suit in parliament basks in glowing praise from other SABC executives and the SABC board. 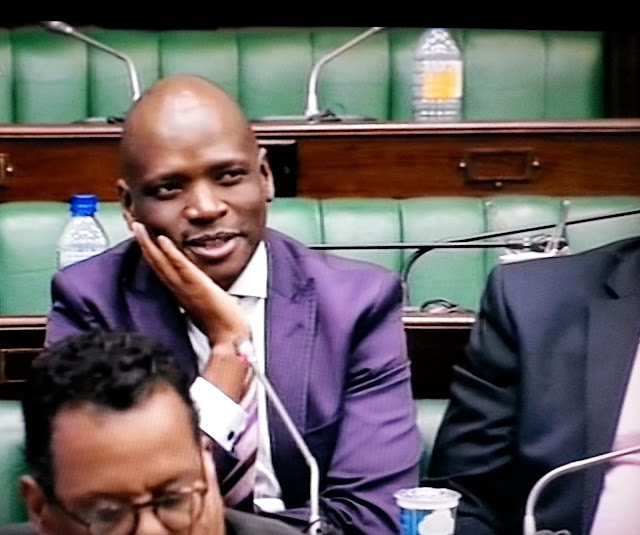 Parliament on Tuesday felt like the old, aristocratic French court of yore and the excessive fawning one sees during a North Korean inspection tour, when SABC executive after SABC executive lavished glowing praise, in front of him, on their magnificent SABC boss, Hlaudi Motsoeneng,

The SABC's famously matricless chief operating officer (COO), dressed in his often-seen royal purple suit, was praised in parliament by his fellow SABC executives for reducing costs, building "strategic partnerships", his wonderful sense of fashion and even just his personality.

"Thanks to Hlaudi, [the SABC] was able to reduce the costs by about $2 million [for sports rights], said James Aguma, SABC chief financial officer (CFO).

"In this area of sports rights it is the individuals who negotiate for these rights, that determine whether you're going to make a saving or not. We battled for some time to negotiate but however in this area it's a personality issue".

"We've asked Treasury to give us funds [to cover local elections], we've not got them. Luckily the COO has managed to get us about R15 million from strategic partnerships," said James Aguma.

SABC board member Dr. Aaron Tshidzumba, said "we had officials talking about the skill of our COO, Hlaudi Motsoeneng. He comes in handy on his negotiation skills."

"Last year we were left with two days to be closed out on the CAF [soccer broadcasting] deal because the private industry was bidding higher. He was on suspension ["voluntary leave"] at that time. When he came back, within two days, he even got less $2 million, which is R32 million [to close the deal]," said Dr. Aaron Tshidzumba.

The SABC's head of news Jimi Matthews, and current acting SABC CEO, likewise fawned over Hlaudi Motsoeneng, even complementing him in parliament on his fashion sense.

"But it has to do a lot with personality, and I think that's the one thing that has impressed us," said Jimi Matthews.

"So when different executives or staff members at the SABC talk about the persuasive qualities of Hlaudi Motsoeneng it's not a thumb-suck or far-fetched. We have a very good working relationship with the trade unions for instance for the same reason," said Jimi Matthews.
on 6:52:00 PM