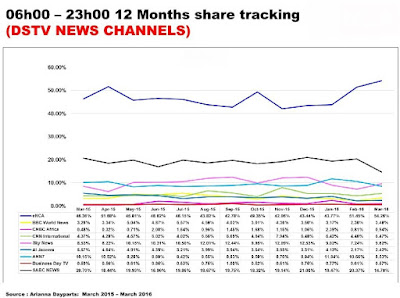 While eNCA remains the most watched TV news channel in South Africa and further grew its lion's share of the available news audience during March, warning lights continue to flicker for the SABC's costly SABC News channel and the Gupta family's struggling ANN7 as both channels saw their small ratings plummeting further.

While eNCA's ratings on MultiChoice's DStv satellite pay-TV platform is up from a month ago, February to March 2016, as well as year-on-year compared with March 2015, both the SABC's beleaguered SABC News channel and ANN7 don't have good news stories to tell.

Both SABC News and ANN7 saw their viewership fall from February to March, as well as year-on-year as more viewers prefer to watch eNCA.

While audience ratings and share is not an indication of trust or credibility, it is an indicator of what news source viewers prefer and seek out and who they like to get their news from.

What the viewership ratings and share compiled by AGB Nielsen Media Research means, is that more South African viewers are tuning in to watch eNCA during 06:00 and 23:00 daily, than viewers who watch any of the other local or internationally available TV news channels on DStv - combined.

In stark contrast, and despite millions of rands being funneled into the running of the channel - the SABC's second attempt at a 24-hour TV news channel - the public broadcaster's SABC News (DStv 404) declined by 27.9% in March.

Meanwhile Sky News (DStv 402) remains the most watched and most popular international TV news channel in South Africa with a news audience share of 9.62%, followed by CNN International (DStv 401) in second place with a 6.47% share in March.

Both local business news channels - ABN360's CNBC Africa (DStv 410) and the Times Media Group's BusinessDay TV (DStv 412) - continue to struggle with neither managing to even pull 1% each of the available news audience.