eNCA remains the most watched TV news channel on DStv; now also has a bigger overall viewership share at 51% than all other news channels combined. 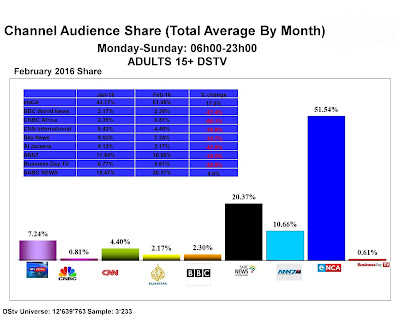 While the eMedia Investments news channel on MultiChoice's satellite pay-TV platform is by far eclipsing much smaller rivals like SABC News (DStv 404) and ANN7 (DStv 405), eNCA in February 2016 managed to lure more viewers than all of the other available TV news channels on DStv combined.

Based on the February 2016 viewership share figures, eNCA, now with the journalism professor Anton Harber as new editor-in-chief since the beginning of March, is now larger in terms of the news audience share on DStv than all the other TV news channels put together. 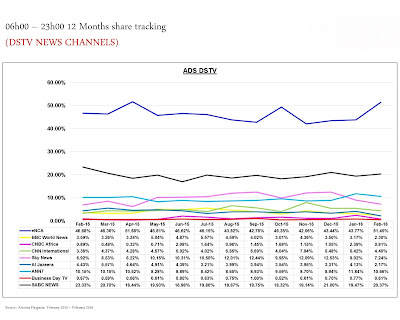 Besides eNCA towering above everyone else, the other two local South African TV channels are struggling with traction.

While the SABC receives millions of rand from MultiChoice to provide the SABC News channel exclusively to the DStv platform, it only had a 20.37% audience share in February 2016 - down in fact from a year ago in February 2015 when it stood at 23.33%.

Tracked over a 12-month period from February 2015, BBC World News celebrating its 25th anniversary, as well as the Al Jazeera, BusinessDayTV and CNBC Africa channels all lost audience share over the past year.

Besides eNCA and its big lead, CNN International (DStv 401) and Sky News (DStv 402) were the only other two TV news channel that managed to marginally increase its audience share the past year.