SABC abruptly cancels disciplinary hearing of its controversial COO Hlaudi Motsoeneng with no outcome; SABC 'hell-bent on reducing disciplinary to a sham'. 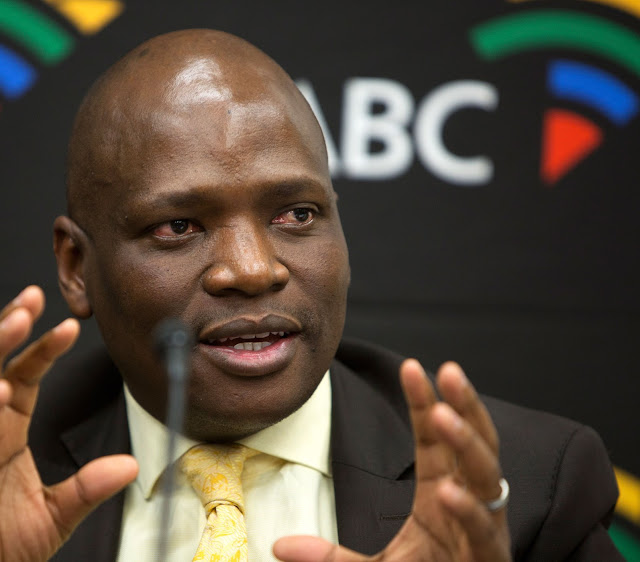 The SABC has given no reason as to why the disciplinary hearing was terminated, nor what will be happening with Hlaudi Motsoeneng who has not been suspended but went on a "voluntary leave of absence".

The unstable public broadcaster that continues to lurch from crisis to crisis is not just without a COO but also a CEO - it's CEO Frans Matlala was abruptly suspended in mid-November just five months after he was appointed.

The disciplinary hearing was supposed to start at the end of October but was then suddenly postponed to 1 December. The SABC also suddenly got rid of labour lawyer Sandile July as the lead prosecutor in the hearing, replaced by Mpoyana Ledwaba as the SABC's pro-forma prosecutor.

The disciplinary hearing was then again postponed to 2 December and suddenly ended yesterday after two days with no outcome and no indication of where it leaves Hlaudi Motsoeneng who was never actually suspended by the SABC but who went on leave.

William Mokhari said the Western Cape High Court's judgement this past Friday that set aside Hlaudi Motsoeneng's appointment as permanent COO of the SABC became a material intervening factor in proceeding with a disciplinary hearing.

Besides the Western Cape High Court Case, Hlaudi Motsoeneng is also embroiled in another court case. In that case, the Supreme Court of Appeal in October dismissed Hlaudi Motsoeneng's appeal against another high court judgment.

That court judgment from the Supreme Court of Appeal underscored the previous court judgment that the SABC, in line with the findings of the Public Protector's report in February 2014, must start disciplinary proceedings against Hlaudi Motsoeneng.

The Public Protector in February 2014 in a scathing report entitled When Governance and Ethics Fail, implicated Hlaudi Motsoeneng in maladministration and abuse of power at the South African Broadcasting Corporation.

The Public Protector found that Hlaudi Motsoeneng lied about having matric and made up symbols for a certificate he knew he couldn't produce, said that he "should never have been appointed at the SABC".

Hlaudi Motsoeneng was implicated as having been involved in getting rid of everyone who testified against him in an earlier disciplinary hearing at the SABC, and his salary increased from R1.5 million to R2.4 million at the SABC in one year.

"As far as the disciplinary inquiry is concerned, I appreciate the predicament the SABC was confronted with because it was a court order which obliged the broadcaster to convene on pain of contempt of court if it failed to do so," said William Mukhari.

William Mukhari told SABC News that the SABC "will always be at liberty to decide at an appropriate time whether to proceed with the disciplinary inquiry".

After the abrupt termination of Hlaudi Motsoeneng's disciplinary hearing, his lawyer Zola Majavu said "we are in limbo as the SABC has not pronounced where he stands. If the employer decides not to discipline him, they must decide where he stands so that we can look at his labour rights".

Zola Majavu told the SABC that "there would be nothing illegal about him reporting [back] for duty at the SABC on Friday because he went on voluntary leave, he was not on suspension."

"In any event the basis of the voluntary leave was to allow the disciplinary hearing to proceed. It has now been terminated not by himself, not by the SABC but by the presiding chairman."

In a statement the Democratic Alliance (DA) political party said it will now proceed with contempt proceedings against the SABC.

"It is utterly preposterous to suggest, as the SABC now does, that two separate judgments, both requiring serious and immediate sanction of Hlaudi Motsoeneng, cancel one another out, having the result that he should return to work as COO."

"The suggestion is so absurd and baseless in law that it confirms that the SABC is hell-bent on ensuring that this disciplinary process is reduced to a sham," says the DA.

"The vexatious endeavour to shield Hlaudi Motsoeneng from accountability at all costs is the gold standard of contempt and disdain for due process by a state entity."
on 12:32:00 PM