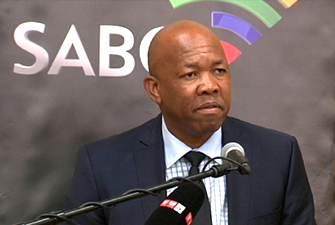 Top management instability and scandal continues to rock the SABC with the beleaguered South African public broadcaster that has suspended the new SABC CEO Frans Matlala with immediate effect pending an investigation that the SABC doesn't want to talk about.

The SABC's acting chief operating officer (COO) and head of news Jimi Matthews is now taking over as acting CEO.

Jimi Matthews who himself was accused of assault charges earlier this year was already standing in for the embattled and highly controversial and famously matricless Hlaudi Motsoeneng who is facing a disciplinary hearing and went on "extended leave".

Hlaudi Motsoeneng went on "extended leave" following a recent order of the Supreme Court of Appeal, coming more than a year after the February 2014 report from the Public Protector which directly implicated Hlaudi Motsoeneng in abuse of power and maladministration at the SABC.

Frans Matlala took over in July as the umpteenth SABC CEO after several SABC CEO's were fired and resigned in previous years without finishing their contract terms.

Management and executive instability as well as political interference continue to rock the struggling public broadcaster which reported a loss of R403 million for the latest financial year.

Meanwhile a a long-delayed process has been delayed even further to try and replace just two out of 6 long-vacant positions on the SABC board.

Meanwhile the process to find replacements for the most "recent" empty seats on the SABC board hasn't even started yet. Besides the two positions of which the replacement process is delayed due to a parliamentary strike, there's 4 further empty SABC board positions.

The SABC top management structure and SABC board is totally gutted: the SABC is now without a CEO and a COO, along with several empty seats on the SABC board, while several other top executive positions at the SABC also remain unfilled.

"The board of the SABC today suspended with immediate effect the group CEO Frans Matlala pending an investigation," is all the embattled SABC managed to put out to the media in a terse statement todayby SABC spokesperson Kaizer Kganyago.

"The SABC’s group executive for news and current affairs, Jimi Matthews, will be acting CEO during this time," said the SABC in the statement.

"The organisation will not comment further on this matter, until all processes are finalised," said SABC spokesperson Kaizer Kganyago, refusing to say why Frans Matlala was suddenly suspended, further deepening the ongoing management crisis at the SABC.

The SABC remains riddled with top management turn-over and financial problems, personnel unhappiness, accusations of political interference and an unstable SABC board with numerous vacancies.

The Democratic Alliance (DA) political party was quick to react to the latest chapter of the SABC's ongoing crises, with Phumzile Van Damme, the DA's shadow minister of communications saying in a statement that the suspension of SABC CEO Frans Matlala "was carried out with virtually no reasons provided to parliament and the public".

She called on the minister of communications, Faith Muthambi to "come clean" on the reasons for Frans Matlala's sudden shocking suspension.

She said Faith Muthambi must "urgently provide the reasons for Frans Matlala's suspension and urgently fix the permanent state of chaos in order to restore much lost credibility to the SABC".
on 4:50:00 PM