In national student protest over fees, ANN7 on DStv reports that students are calling for the 'CRAPPING OF FEE HIKES'. 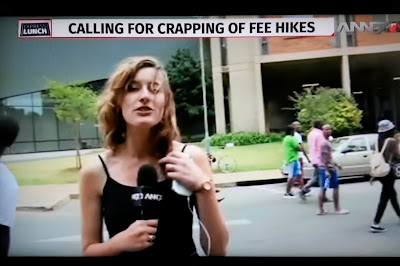 The South African 24-hour TV news channel continues to have a problem with, and to embarrass itself, with on-air mistakes, amateur editing and other issues which make it difficult for ANN7's reporting to be taken seriously.

Just a few days ago ANN7 held its 2nd South African of the Year Awards 2015 which was embarrassing because of an American headline performer Jason Derulo asking South Africans if they can speak English.

ANN7 didn't invite media and TV critics to this year's event so I went out to visit friends on the Saturday night.

When I got back home and switched my TV on just before 22:00, the first thing I saw was Hugh Masekela getting the lifetime "achivement" award from ANN7, massively blasting "achivement" spelled wrong in the giant screen for all their invited guests and viewers to see. 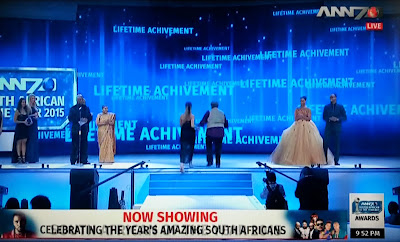 Talk about awkward. But it was about to get worse.

When Hugh Masekela got on stage, ANN7 spelled his name wrong on the vanity cheque handed to him. The name of their lifetime achievement recipient.

To make things more cringe-worthy, Hugh Masekela called ANN7 out on it, on stage. "I don't think they'll change that cheque for me because you've spelled my name wrong," Hugh Masekela told ANN7 and the South African of the Year organisers. 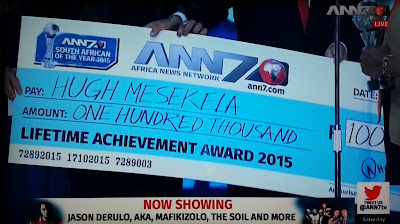 It wasn't the end. Immediately after that ANN7's bottom third banner went up, telling viewers that "Hugh Masikela" won the lifetime achievement award - the third major spelling oops in just the few minutes I watched. I couldn't watch anymore and changed the channel. Besides Jason Derulo I don't know what else went wrong and was shown wrong by ANN7, possibly leading to embarrassment for the South African of the Year Awards.

Who are the people responsible for all these mistakes? Who is in charge of checking these things, or nobody? If somebody is checking these on-air "bloopers", why do they continue to happen and are people not competent, or fired, or trained or not senior enough to see mistakes?

I think ANN7 needs to invest in senior editors and news producers, or more of them, to lessen the constant on-air gaffes on the DStv news channel because viewers look and laugh at it instead of look and listen.
on 2:28:00 PM