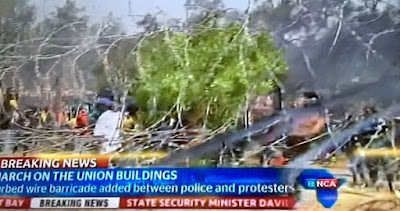 South African TV news crews, as well as newspaper journalist and radio reporters, were confronted by a challenging, difficult and extremely unpredictable day today, trying to cover, and to cover all the angles of the student fees protest which reached the Union Buildings today.

The fast-developing took a violent turn as the #FeesMustFall student protest turned the lawns of the Union Buildings in Pretoria on Friday into a "hot zone", filled with rocks and stones being thrown as well as other objects, journalists threatened by protesters, students burning porta-potties and police firing stun grenades and tear gas.

eNCA suffered damage due to vandalism including cable theft, while eNCA reporter Iman Rappetti and camera crew were pelted with rocks.

At least one SABC reporter got injured and was hurt in the chaos, while both newspaper journalists and radio reporters were threatened with physical assault.

Most South African TV news crews and broadcasters, in hindsight, didn't take adequate precautions entering the area and covering the student protests as an unpredictable, and therefore dangerous, news story.

The SABC's one outside broadcasting (OB) vehicle was warned to pack up and get out since it might be set alight by the thousands of protesters who went on a rampage and started burning tyres, breaking down the wire fence surrounding the Union Buildings, throwing rocks at media and police, and burning porta loos.

eNCA (DStv 403) anchor Iman Rappetti was hit with an object when at one point she suddenly found herself in the middle of rocks, stones and other objects being flung by protesters.

Later, Iman Rappetti, together with the eNCA crew, were subjected to some of the rounds of teargas fired by police on the Union Building grounds, after being pelted with rocks and stones.

An eNCA camera was also damaged by a rock, with a lens shattered. Although the cameraman was hit as well, he was uninjured as heavy-handed riot police once again moved in.

Earlier in the day eNCA cabling was also stolen and the vandalism also put an eNCA satellite van out of action.


"We gotta get out! We gotta get out!" said a panicked Iman Rappetti in a clip from the eNCA broadcast included in one of the stories filed by Sky News (DStv 403) when the eNCA crew suddenly came under attack at the Union Buildings.

"An object did hit Iman Rappetti in the face, but she was not injured and is fine," eNCA told TV with Thinus. "A rock also hit one of the camera lenses, damaging it and putting it out of action".

Reporters Bingiwe Khumalo and Nontobeko Sibisi also covered for eNCA in Pretoria, and Nickolaus Bauer followed events from inside the Union Buildings.

On SABC News (DStv 404), senior reporter Chriselda Lewis who did brilliant coverage on location on Friday, got her one live on-air interview interrupted and abandoned after protesters derailed it.

"It was absolute chaos. Absolute chaos," said a hoarse Christelda Lewis on SABC News on Friday evening back in studio at Auckland Park.

"One of the SABC journalist's got hurt and at some point we were being thrown - I don't think it was directed at the journalists - but the teargas was all up in our faces," said Chriselda Lewis.

"We were unable to do our jobs. Absolute chaos at the end of the day."

A BBC cameraman was also injured by objects hurled by protesters on Friday.

CNN International's (DStv 401) David McKenzie was at the Union Buildings as well covering the unpredictable protest that escalated as the event progressed.
on 6:37:00 PM