SABC staff upset over 'threat' that they must wear Boks T-shirts every Friday; 'gifts should not come with demands like this,' says SABC workers. 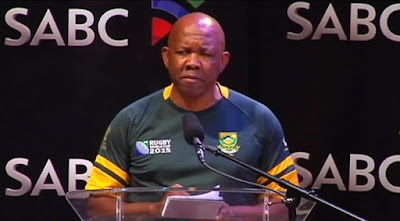 SABC staff are unhappy over a "threat" from the public broadcaster that they must wear the Rugby World Cup 2015 T-shirts they were given on Fridays and that not wearing it "will be viewed in a serious light".

Hannes du Buisson, president of the trade union Bemawu on Tuesday wrote to Mandiwe Nkosi at the SABC, asking that "this threat be withdrawn and the same be communicated to SABC employees".

The SABC, in an internal communiqué this past Friday, told SABC staff that they're reminded "to wear your Bokke T-shirt every Fridayfor the duration of the Rugby World Cup 2015" and that "if you have been allocated the T-shirt and do not wear it, this will be viewed in a serious light".

In his letter Hannes du Buisson says that the SABC "says its values are conversations and partnerships, restoration of human dignity and building a common future. Apparently not the human dignity of its employees".

The letter includes feedback from several upset SABC workers about the Boks T-shirts.

"We have just received this email.  There were no stipulations with regard to receiving T-shirts.  I didn't even sign for it.  I found my T-shirt on my work seat.  It is not the correct size for me as was the case with several people. The only sizes available were Small or XXL. I will not wear one which is too tight (I was given a small) or XXL which is way too large for me."

"Whatever it means 'in a serious light' is not right. Should we really be pressurised into wearing a 'uniform' just because the SABC decided to give us a gift? 'Gifts' should not come with demands like this.'

"I was allocated with a 3XL Springbok shirt that does not fit me. I tried to find out if I could get a 4XL and I was told that there are only small sizes. But that is not the point, the point is that they are threatening us if we don't wear a rugby shirt, does it make any sense?? Once again I have no problems wearing a Bok shirt, but without threats."

"I take exception to the implied threat in this communiqué," said another SABC worker. "I have a constitutional right to wear what I like, when I like."

"The threat of 'will be viewed in a serious light' implies disciplinary action will be taken against an employee or an employee will be subjected to an occupational detriment should they not wear it. This is to say the least unconstitutional and very bad management style," says Hannes du Buisson.

"Instead of motivating employees and encouraging them to support the national team, they are threatened. This clearly reflects the current style of management at the SABC where employees are threatened and intimidated, and the SABC acts as if employees have no rights," says Hannes du Buisson.

He said SABC staff "should  be allowed to wear what they want to work, not be threatened. Our complaint is not about the Bokke shirts, but the threats to wear it."

SABC spokesperson Kaizer Kganyago didn't respond to a media enquiry on Wednesday asking about the SABC's Bokke T-shirts given to staff, workers' reaction and the Bemawu letter.