SABC splash out on HD enabled studio; Hlaudi Motsoeneng excited by the colours that can change, will be used for World Cup Rugby commentary. 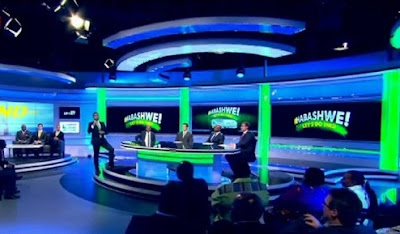 The SABC has splashed out millions of rands for a new high definition (HD) enabled studio that will be used for in-studio programming primarily for SABC sport broadcasts and SABC news and current affairs.

While the studio is HD enabled, currently none of the public broadcaster channels or any SABC content are actually seen anywhere in HD. The SABC says it plans to build similar studios in all of South Africa's provinces.

The unveiling of the SABC's new HD studio - which looks like a cheaper version of the existing SuperSport sports studio and set in Studio 6 in Randburg - was broadcast live on SABC News (DStv 404) on Wednesday on MultiChoice's DStv satellite pay-TV platform.

The SABC will use the new HD enabled set for the first time to do coverage of the upcoming 2015 Rugby World Cup tournament from a new set incorporating oval platforms that has been constructed in the studio.

The studio which was unveiled by the minister of communications, Faith Muthambi on Wednesday includes a touch screen which initially didn't work during the SABC's unveiling, 4 big video walls, 6 digital cameras and LED lighting.

Like SuperSport, the SABC will for the first time now be able to provide viewers on its channels with augmented three dimensional graphics for sport, for instance showing statistics of players and teams.

Coverage of the upcoming local municipal elections as well as the 2016 Olympic Games next year will also take place from the new SABC studio.

She said on SABC News that SABC viewers will be "able to watch rugby from their living rooms, comfortably so, with high definitition television".

Meanwhile the long-stalled switch-over from analogue broadcasting in South Africa is years behind schedule and has no official commercial switch-on date yet.

Faith Muthambi didn't reveal the cost of the new HD enabled studio of the SABC but said it saved the SABC R11 million as the broadcaster splurged on champagne for the 4th time this year to toast the new studio. 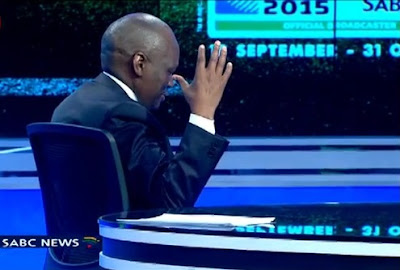 The SABC's controversial and famously matricless chief operating officer (COO) Hlaudi Motsoeneng said he's excited about the SABC's HD studio because it's got social media and a touch screen and the colours change.

While the new SABC CEO Frans Matlala was present but sat at the back in the audience and didn't speak, Hlaudi Motsoeneng was once again in the limelight under the bright studio spotlights and spoke on behalf of the SABC.

"If Bafana Bafana play the colours will reflect Bafana. If Springboks play it will represent the Springboks. I'm very excited about this new technology."

'The colours, the sets, the lights, they just change. I mean you can set the lights, whatever, blue. Whatever colour that you need. We are able to do that. For us it is very exciting," said Hlaudi Motsoeneng on SABC News.