BREAKING. SABC's matricless boss Hlaudi Motsoeneng salary gets a staggering 31% increase in one year from R2.87 million to R3.78 million. 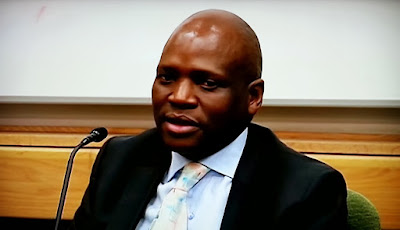 The remuneration of the SABC's controversial boss Hlaudi Motsoeneng went up by a staggering 31% in just one year from R2.87 million to R3.78 million in the latest financial year - including a bonus paid of R279 000.

Hlaudi Motsoeneng's eye-popping pay is nearly R1 million more in payment from the public broadcaster than in the previous financial year, and was revealed today when the SABC tabled its annual report in parliament.

The SABC's famously matricless chief operating officer (COO) is embroiled in a protracted court case currently at the Supreme Court of Appeals, over his appointment as COO at the SABC after he lied about having matric and was fingered in last year's scathing report from the Public Protector which found that he should "never have been appointed at the SABC".


The report found maladministration and abuse of power at the public broadcaster and said that Hlaudi Motsoeneng admitted in a recorded interview to lying about having matric and made up symbols for a certificate he knew he couldn't produce.

The Public Protector ordered the SABC to suspend Hlaudi Motsoeneng following the findings of the irregular appointment and that a disciplinary process be started immediately.

"This nearly R1 million pay increase is incomprehensible given the ongoing crisis at the SABC," says the Democratic Alliance's Gavin Davis, member of parliament and member of parliament's portfolio committee on communications, in a statement on Wednesday.

"It is significant that in 2014 the Public Protector found Hlaudi Motsoeneng guilty of unlawfully increasing his own salary three times in the space of one year. It appears that is at it again," said Davis.

"Hlaudi Motsoeneng continues to rake in millions of rands at the expense of the TV licence paying public. There can be no justification for Motsoeneng's salary to increase by 31% in one year."

"In comparison, other workers in the public sector such as nurses, teachers and police officers received a 7% increase over the same period".

"It should be remembered that Hlaudi Motsoeneng was earning just R334 000 as a SABC radio producer in 2010. Five years later and his salary has increased more than ten-fold," said Gavin Davis.

"We cannot sit back and allow Hlaudi Motsoeneng to wreck the SABC and be rewarded handsomely for doing so."
on 1:06:00 PM