Growing concerns about the process followed and the validity of the appointment process of the new SABC CEO Frans Matlala. 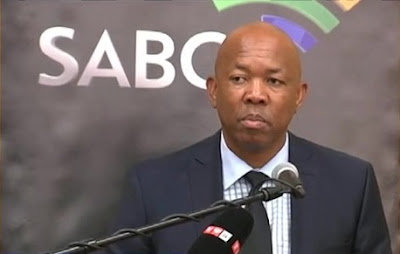 Concerns are growing around the process followed and the validity of the appointment of Frans Matlala who the South African Broadcasting Corporation yesterday announced as its new CEO.

The rudderless SABC, which is also limping along with a gutted SABC board, hasn't had a CEO for a year and five months since Lulama Mokhobo abruptly quit in February 2014 without explanation and left with a golden handshake just a few months into her 5 year contract

At its Auckland Park headquarters the SABC yesterday announced that Frans Matlala, a former banking executive who've been an advisory consultant for the SABC for a year, has been appointed as the new SABC CEO.

Frans Matlala was already identified in October 2014 as the frontrunner to become the new SABC CEO as fears grew that Hlaudi Motsoeneng, the controversial and famously matricless chief operating officer (COO) would be appointed as CEO.

SABC executives Tian Olivier and Anton Heunis who had both served as acting SABC CEO in the past were the other two contenders for the position. In April Anton Heunis suddenly left the SABC as acting CEO.

Frans Matlala said he hopes to serve as SABC CEO for the entire length of his contract. Since 2009 several SABC CEO's either left or were fired long before the end of their tenure.

"It is very difficult to comment on a process where there has been so little transparency," William Bird, MMA director tells TV with Thinus.

"We would like to know: When was the SABC CEO position advertised? Who were the top three candidates, when did the interviews take place, who made the decision at SABC board level and when was person appointed?"

"We heard contradictory statements at the SABC press conference. We we told that Peter Matlala was appointed by the current reduced SABC board. Hlaudi Motsoeneng then said that actually the SABC CEO appointment had taken place under the older SABC board before the two members were removed, and that the delay was in the minister of communications agreeing to the appointment."

"It cannot be both," says William Bird.

"It seems that yet again instead of improving corporate governance we have another controversial SABC appointment that is likely to yield more challenges in the future."

The SOS Coalition, a public pressure group representing a vast number of the biggest industry stakeholders in South Africa's public broadcasting sphere, is also raising concern about the appointment process.

"We need to know when the recommendation was made and whether the SABC board that made this recommendation was, indeed quorate, or whether, yet again, it operated unlawfully to push for an appointment viewed as suitable by government," Sekoetlane Phamodi, SOS Coalition coordinator tells TV with Thinus.


"There remains the tender issue of the legality of the Memorandum of Incorporation," says Sekoetlane Phamodi.

"[It] is incompatable with the basic tenets of public broadcasting which require the institution to be demonstrably independent of government influence in how it allows the government of the day to cherry-pick the editor-in-chief of the SABC as well as the very people that direct the operations and finances of the SABC."

"This cannot be allowed to be the case lest the SABC is reverted back into a state broadcaster as we had under the erstwhile apartheid regime," says Sekoetlane Phamodi.

The Democratic Alliance (DA) political party also says there are questions around the appointment process of Frans Matlala.

"With only 6 members, the SABC board is three short of the quorum it requires to make legally binding decisions such as the appointment of a new CEO. The DA is looking into this," says Gavin Davis, DA MP and a member of parliament's portfolio committee on communications.

The Congress of the People (COPE) said it doesn't support Frans Matlala's appointment as SABC CEO.

Leah Khumalo, new SABC board deputy chairperson, said that "we believe we had enough quorum to make the appointment. We are sure all legal requirements were satisfied".

Hlaudi Motsoeneng said at the Auckland Park press conference that "Frans Matlala was appointed even before the three SABC board members left the organisation. It is not a new matter. The only issue that was outstanding, it was the approval from the minister".

The minister of communications, Faith Muthambi, congratulated Frans Matlala who is a supporter of Hlaudi Motsoeneng.

"We wish Frans Matlala all the best as he undertakes the important task of ensuring that our public broadcaster delivers on its mandate of fulfilling the public's right to know, educate, and entertain as well as nation building."

"We are looking forward to working with him, the SABC board and the entire leadership of the SABC in realising their obligation to serve the whole population."
on 2:05:00 PM