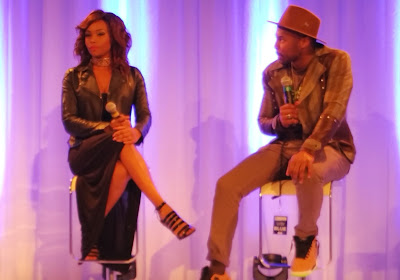 Queen B and popular multimedia personality Bonang Matheba says success takes hard work, persistence and commitment and says young people across Africa should resist the lure of the instant gratification they see on social media and the instant fame they seek, and rather work hard to achieve their dreams.

Bonang Matheba is a nominee in the category for Personality of the Year at the 2015 MTV Africa Music Awards taking place in Durban on Saturday evening at the Durban International Convention Centre that will be broadcast live on MTV Base (DStv 322), MTV (DStv 130) and BET (DStv 129) from 21:00 and from 22:00 on e.tv.

Bonang Matheba spoke at the pre-event press conference which took place on Friday evening at the Playhouse Theatre in Durban.

"For this generation is a lot about instant gratification who sometimes forget about the true value of hard work and persistence that needs to go into achievement. I would say that 'overnight success' takes four to five years to create."

"Unfortunately we live in an era where peer pressure surrounds you on Instagram, on Twitter, on Facebook. You want everything to happen quickly. Because of that few people see the true value of hard work. There is no limit to what you can achieve through hard work."

Bonang Matheba also had good words for social media though. "Social media - Twitter, YouTube - makes it easier for us as Africa to be seen by the world."

She said that the influence that comes with having a large number of followers, and cyber fans is beneficial to artists' careers and helps with exposure but also cautioned that "as a personality you need to have a boundary" and that social media shouldn't be allowed to consume your life.
on 3:48:00 PM