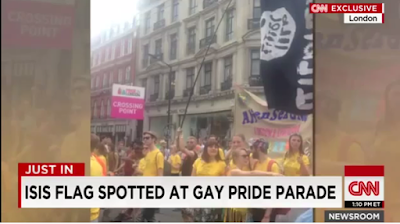 CNN International (DStv 401) has quietly removed the video of a story in which the TV news channel "exclusively" spotted and reported on a "ISIS flag" on Saturday in a gay pride parade in London which was actually a flag filled with sex toys.

The incident is already called "CNN’s most embarrassing flub ever".

The video of the news report remains available on YouTube where it's racked up close to 4 million views since Saturday.

It started when CNN went into breathless reporting about how the black and white "ISIS flag" showed up at the Pride Parade in London, "exclusively" spotted by CNN International assignment editor Lucy Pawle.

Lucy Pawle said she seemed "to be the only person who had spotted this, and nobody seems to be raising any questions or pointing it out".

Lucy Pawle then confirmed that a gay event organiser also knew nothing about the flag. "I also spoke to the police nearby, who weren't aware either," said Lucy Pawle of the terrible terrorism flag.

CNN then went on to cover the "terrorism" story for six and a half minutes, with CNN anchor Suzanne Malveaux shocked that London authorities are not tracking and arresting the flag waver.

CNN even quickly got in the terrorism expert Peter Bergen to comment and give perspective on what it all means.

Nobody at CNN noticed as the channel zoomed in on the flag, as well as the man waving it, and kept discussing the terrorism implications at length in its "exclusive" scoop.
on 2:29:00 PM