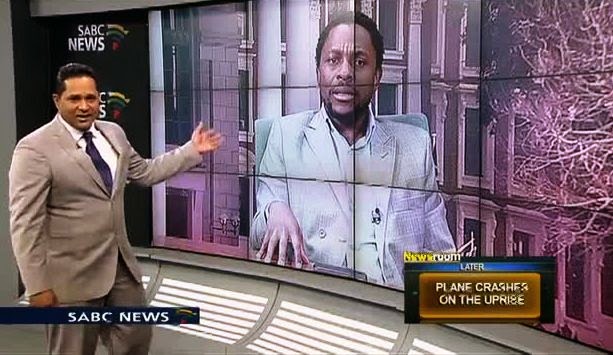 The SABC has immediately removed its news anchor Eben Jansen from its SABC News (DStv 404) 24-hour TV news channel following an eye-poppingly aggressive live TV interview which went shockingly wrong on Thursday when Eben Jansen railroaded an invited guest and then abruptly cut him off.

The SABC has taken Eben Jansen off the SABC's airwaves indefinitely, pending an investigation into the news anchor's aggressive interviewing behaviour on live television.

It follows a shocking verbal altercation on live television on Thursday on the SABC's 24-hour TV news channel when Eben Jansen interviewed EFF national spokesperson Mbuyiseni Ndlozi during his programme The Newsroom.

The contentious interview quickly devolved and turned into a disgraceful shouting match similar to the FOX News Channel (StarSat 261) with Mbuyuseni Mdlozi who was invited for the interview, asking Eben Jansen repeatedly whether he was going to be given a chance to speak.

"I'm not going to allow you to speak anymore Mister Ndlozi because we can't have a conversation," said Eben Jansen, cutting the invited guest off in what started out as an interview about the current hot button topic of the removal and vandalism of colonial and apartheid era national statues in South Africa.

Eben Jansen was fired by e.tv and taken off the air in 2002 where he was sports editor and sports anchor over on-air comments. Eben Jansen rejoined the SABC three years later in March 2005 as an Afrikaans news reader on SABC2 where viewers complained about his Afrikaans TV news reading abilities.
on 8:09:00 PM