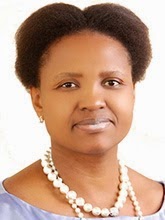 In yet another new scandal, although the SABC said in a statement "all stakeholders were informed" the fired SABC board member Hope Zinde says she got nothing and says that she is definitely still a SABC board member.

In a statement the fired Hope Zinde says "I want to assure you that I am still very much a member of the board of the SABC."

The SABC said that Hope Zinde has been removed as a SABC board member following a vote of no confidence in her on Thursday. The SABC said in its statement that "the decision in this regard has already been communicated to all the relevant stakeholders".

Hope Zinde says she heard about her ousting in the media and received no documentation.

On Friday the SABC moved quickly to remove all trace of Hope Zinde from its website - besides the news stories from SABC News that she's been voted out of the SABC board - with Hope Zinde's profile which was removed from the SABC's website listing the current SABC board.

"Why are we on the board, to just rubber-stamp? I do not agree," said Hope Zinde.

In January, SABC board member Prof Bongani Khumalo resigned, allegedly also because of the minister of communications Faith Muthambi's interference who allegedly sent letters to the board members asking why they should not be suspended.

"I was shocked to learn from the media that I have been removed from the SABC board," said Hope Zinde on Friday in a statement.

"I am currently awaiting a process to unfold through the appointing authority, parliament and the presidency, to look into a matter I have been alleged to have committed."

"The acting chairperson Prof Obert Maguvhe and the SABC board members who supported him to carry out this illegal act - unquorated as they were - acted unlawfully by proceeding with a matter without any inquiry, facts nor evidence to prove the allegations that I divulged board matters to the ANC communications stakeholder lekgotla," says Hope Zinde.
on 3:42:00 PM