BREAKING. SABC to keep SABC2 a simulcast of SABC News for the week, broadcaster's soaps moving to SABC1 and SABC3 with double episodes. 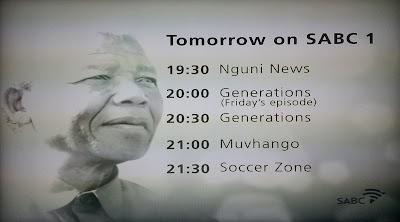 The SABC has finally figured out and come up with a logistical scheduling roadmap for the week ahead for its TV channels - SABC1, SABC2 and SABC3 - and its TV soaps following the death of Nelson Mandela.

TV with Thinus has the most comprehensive, accurate and comprehensive Nelson Mandela TV guide with latest changes, and listing of special Madiba programming across all channels.

For the duration of the week ahead - until at least Sunday 15 December, SABC2 will remain an exact simulcast broadcast of SABC News (DStv 404).

(For Nelson Mandela's funeral on Sunday 15 December, SABC1 and SABC3 will switch to the SABC News feed together with SABC2.)

SABC1 and SABC3 will continue to carry special episodes featuring or thematically linked to Nelson Mandela from its archives during the course of the upcoming week.

Generations viewers will be able to see two episodes on Monday 9 December on SABC1 from 20:00 to 21:00. Friday's dropped Generations episode will show at 20:00, Monday's episode will be at 20:30, and from Tuesday Generations will continue with a new episode on weekdays at 20:00.

Muvhango on SABC2 is moving to SABC1 for the entire upcoming week at 21:00.

7de Laan on SABC2 is moving to SABC3 for the entire upcoming week at 18:30. On Monday however there will be an additional episode at 18:00 on SABC3 which is Friday's dropped 7de Laan episode on SABC2. 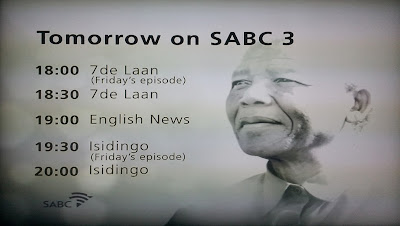