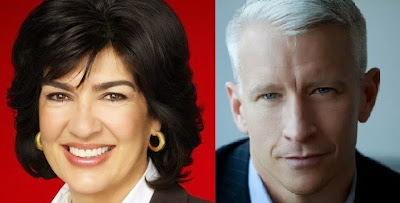 Christiane Amanpour and Anderson Cooper of CNN International (DStv 401) are now both also in South Africa to lead unprecedented coverage of the death and funeral and celebration of the life of Nelson Mandela.

CNN International now has the biggest team of reporters deployed in South Africa to cover the death of Nelson Mandela and South Africa and the world's reaction to his passing.

Christiane Amanpour who arrived today in Johannesburg was instantly recognised and greeted at immigration with a "thank you for coming to honour Mr Mandela".

Isha Sesay is also heading to South Africa who've been reporting on Nelson Mandela from Soweto just a few months ago.

They all join South Africa's Robyn Curnow who've already distinguished herself with instantly stellar reporting regarding the death of Nelson Mandela.

Besides CNN International's heavy presence of correspondents in South Africa, here is the already massive - and growing list - of foreign correspondents and TV reporters who've travelled to South Africa and who remain here to cover the biggest official funeral the world has yet seen: