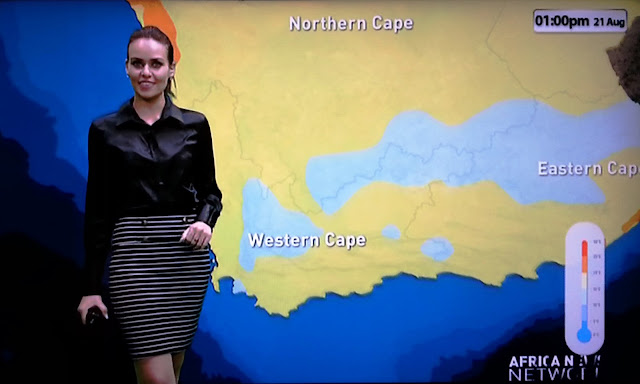 Derek van Dam over at eNCA (DStv 403) and that channel's weather centre finally has true competition in the form of Surita Smit, the ANN7 weather girl weather presenter who's bubbly but not blond and who comes across as a kindergarden teacher or a Kulula flight attendant who've secretly ran away to go do television.

If you've seen Tally Atwater in Up, Close & Personal you will instantly see the similarities between Michelle Pheiffer's character and Surita Smit.

Surita Smit's weather report delivery on ANN7 is a bit too emotive and too fakey-friendly (there's a fine line between being extremely expressively friendly and being patronising). She also made some mistakes in her very first weather report on ANN7 but carried on.

Despite the drawbacks Surita Smit overall exhibits more personality and more schmodel leg changes on television than a lot of the dry on-air meteorologists on South African television.

Surita Smit gives you the high tide times whilst doing the schmodel pose simultaneously, and you expect her to at any time say "make sure you tray tables are folded away and that your seat is in the upright position".

The ANN7 weather map by the way fills the whole screen and provides less detailed information that eNCA weather but is better than SABC News, and includes some additional touches and information bits not provided by other weathercasts on television in South Africa.
on 11:55:00 PM