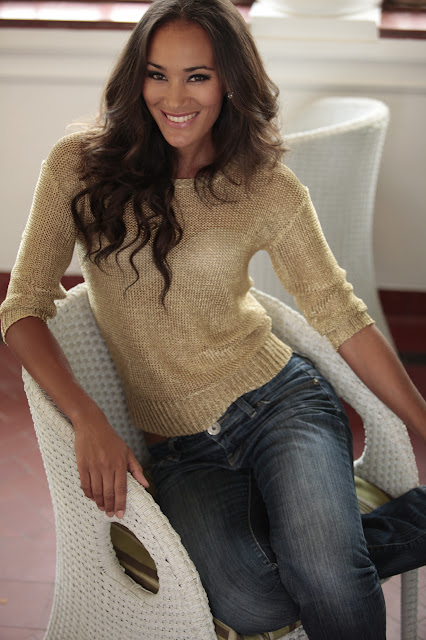 Jo-Ann Strauss who ventured out with her own TV talk show try, Glambition on Mondays at 20:30 on e.tv since earlier this year, is launching her Online Presenter Search 2013 from July. With a litany of corporate sponsor partnerships the aim is to find an e.tv online presenter.

Monday night on Glambition the guests are Bonang Matheba, Dineo Moeketsi and Nodumiso Tembe all speaking about fame and media scrutiny, which is also when the Online Presenter Search 2013, done by Jo-Ann Strauss Productions (JSP) will be launching officially.

"If you think you've got what it takes to make it in the media industry, here's your chance," says Jo-Ann Strauss, calling the cyber social opportunity for people which is taking place in an exotic locale, the chance to "learn a lot" and to "getting a fast-track into the media industry".

People who want to enter this year's competition have to create a TV presenter audition clip of 30 seconds in English introducing yourself and doing a link to camera. The clip then has to be uploaded to the internet and contestants have to enter through the entry form on the website.

Four chosen finalists will be flown to Reunion Island with Jo-Ann Strauss and a celebrity mentor where they will spend a few days at the five star LUX* Ile da Reunion resort getting media training and honing their presentation skills.

The event which will include adventure sports will be filmed for a mini-reality series which will be broadcast on www.presentersearch.com. The winner, who will be announced on 20 September, will become an online presenter for the e.tv TV channel.

People between 18 and 35 from across Africa can enter and the public will be given the opportunity to vote for their favourite.

Jo-Ann Strauss did her first online presenter search in 2012 with her good friend Bonang Matheba who is a talk show guest on Jo-Ann Strauss' show tomorrow night. The former Miss South Africa's online presenter search in 2012 yielded five webisodes and became the world's largest competition of it's kind with hundreds of entries which were uploaded.

For this year's second online presenter search Jo-Ann Strauss clearly planned to leverage online media and social media to an even larger extent as a strategic component, especially given that the aim is to find an online video personality.

The edited show will be broadcast on the web; aspiring presenters are encouraged to upload their auditions which they can record on their cellphones, smartphones and digital cameras to YouTube; finalists will continue to upload a series of clips while they're on the island; and social media such as Twitter and Facebook will be integral to not just engage the viewing audience but also to help find the winner.

The rapid growth means that millions more ordinary Africans are now able to not only watch but also actively participate, engage and coalesce around online video creation and consumption online - something which was previously not generally available, or simply too expensive.
on 10:01:00 PM