Nonhle Thema's TV tell-all on Vuzu following the 1 000th episode of V Entertainment will likely not be that revealing. 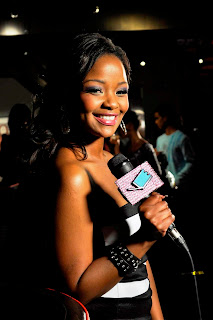 Nonhle Thema is set for a supposed exclusive TV-tell all - the only problem is that it won't really be a tell-all.

The most important question that would-be viewers (who will have to sit down for this) would want to know, can't be asked, and won't be answered in the TV special.

This Nonhle Thema special television event following a few days after the 1 000th V Entertainment episode, will see her open up about her life, being a mom, and what happened since she left Vuzu.

What viewers won't hear the now-notorious dark and lovely baby mamma name or discuss, is the name of her baby daddy.

That is off-limits since Nonhle Thema - whose TV career faded dramatically following a widely panned reality TV disaster and a resultant social media meltdown - agreed to a print exclusive for the true revelation of her child's father.

That means that Vuzu viewers won't see a true no-holds-barred interview, although the interview on Vuzu will still be billed as an exclusive.
on 12:44:00 AM