MINISTER OF MESS-UPS. Minister of communications Dina Pule must be fired, blares the Sunday Times in its front page lead story. 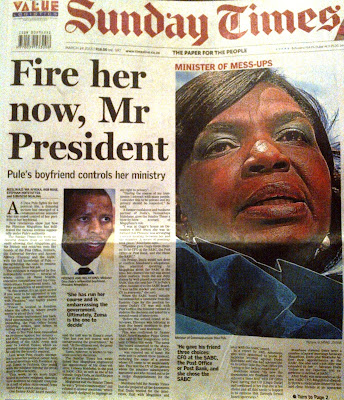 With the "SABC imploding, the Post Office facing crippling strikes, and delays in rolling out digital TV" in South Africa, the Sunday Times newspaper today brazenly called for the red Louboutin wearing minister of communications, Dina Pule, to be fired, branding Dina Pule the "minister of mess-ups" in a front page above-the-fold story which has been making waves in South Africa's TV industry today with the headline:

Besides Dina Pule also getting the red shoe treatment as a "godzilla" type monster with red Louboutins stomping around and leaving the destruction of institutions like the SABC in her wake as the Zapiro cartoon in today's Sunday Times, the Sunday newspaper is filled - filled! - with articles; various opinion-editorial pieces; on the massive meltdown at the beleaguered South African Broadcasting Corporation.

The Sunday Times is now the third publication in South Africa to ask for the head of Dina Pule within a year, following the disastrous track-record of her at the department of communications. "Calls to fire Dina Pule have intensified as evidence against her mounts," said the Sunday Times in its lead story.

"Euthanasia the SABC's best option," is the headline accompanying Redi Tlhabi's opinion editorial piece in the Sunday Times. "Do we need the SABC? No, we do not," writes Redi Tlhabi. "It may not be dead yet, but it is definitely on the verge of becoming obsolete. It suffers from a paucity of credibility and integrity. I wonder if any of the stakeholders actually care about creating a credible, efficient broadcaster?"

Redi Tlhabi writes: "The SABC is also failing to make a meaningful difference in the lives of the public. Yes, I know it broadcasts the plight of the truly desperate and claims to be "touching lives". The best way to touch lives is to roll up your sleeves and actually do the work."

In another opinion editorial piece in today's Sunday Times (oh the joy and seriousness of schadenfreude when the piling on starts) Jane Duncan, professor at Rhodes University's school of journalism and media studies writes: "The minister usurped the SABC board's right to appoint the SABC's three top positions. This had serious implications for the organisation's editorial independence, because the CEO is also the editor-in-chief and the chief operatiing officer has taken charge of news and current affairs."

"These provisions undermined the separation of powers and functions between the SABC and the executive. They are almost certainly unlawful, because they violate the requirement in the Broadcasting Act for the SABC board to control its own affairs."

"Inappropriate political deployments have also caused havoc at the broadcaster."

Jane Duncan writes: "The main reason why the SABC remains trapped in crisis mode is that those who benefit from a weakened SABC are more powerful and well-organised than those who do not."
on 10:15:00 PM