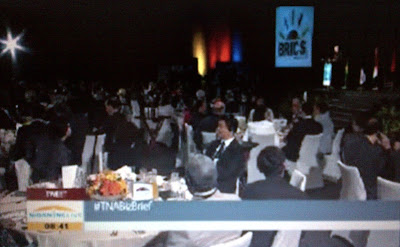 The SABC and The New Age newspaper's SABC The New Age Brics Breakfast Briefing in Durban which was broadcast live on SABC2 on Wednesday morning was once again a terrible television fiasco, marred by amateur production values, sound problems and a babelic mess with no translation for viewers for the Chinese, Russian and Portuguese heard.

After Morning Live presenter Leanne Manas threw to the outside broadcast which the SABC showed live from Durban's International Convention Centre (ICC) for the 5th Brics Summit, viewers had to wait for 20 minutes of small talk before the first speech actually started. Sound problems and sound level problems were already evident.

Awkwardly Peter Ndoro had to walk from table to table to start asking questions from guests, trying to kill time as Lulama Mokhobo, the SABC's CEO was spotted at one of the tables. (Interestingly, the Russian president Vladimir Putin also turned down an offer from the SABC for TV make-up.)

Soon after the SABC TNA Brics Breakfast Briefing started, viewers on SABC2 were confronted with speakers from both the platform as well as using the handheld mic at the tables, speaking in languages which ordinary SABC viewers couldn't understand. Viewers saw guests sitting at the tables with little black headsets, getting translation services.

Meanwhile even the audio level of whatever was heard, fluctuated throughout the broadcast - even at the end when Peter Ndoro again spoke but viewers heard nothing. Then when Peter Ndoro was audible, he was drowned out with a surprised looking Peter Ndoro looking around when the moderator drowned him out with: "Members of the business council can you please come on stage, you are also in the photograph?"

Viewers started trashing the SABC and The New Age on social media for the shoddy live broadcast.

"SABC, what is going on?", "SABC2 attribute names to speakers! Turn up translation! I'm sure I'm not alone in not understanding Chinese or Russian", "Poor planning and total disregard for viewers", "Some idiot at the SABC forgot that all this dignitaties will be speaking in their mother tongue,so we get no translation", "SABC not translating the foreign languages", "Couldn't they at least try subtitles?" were just some of the comment from exasperated and upset viewers.

"Technical issues are turning this into a disaster" said yet another viewer.

The New Age tried to do damage control with a puff piece spin story in its newspaper, calling the SABC TNA Brics Breakfast Briefing "highly successful".

Nazeem Howa, CEO of The New Age said that the response to the breakfast was "overwhelmingly positive, so it is very sad to see the continuous carping from some competitors" without actually mentioning what carping there was, or why.

The story included only comment from the Communications Workers Union (CWU) - interestingly the only SABC trade union publicly sympathetic to Hlaudi Motsoeneng - saying critics were inspired by their own hidden agendas. The newspaper story didn't make any mention of why there was criticism or what is was.
on 5:48:00 PM