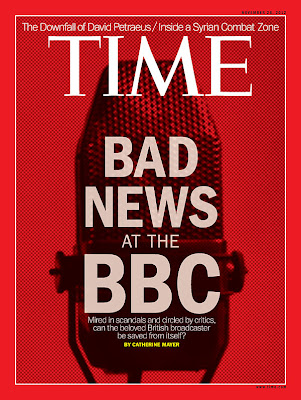 The latest issue of TIME magazine for 26 November which I bought and which will cost you R35 in South Africa at the newsstand unless you're a subscriber, is well worth the price for the fascinating and insightful cover story by journalist Catherine Mayer with the main barker: "Bad News at the BBC" and then the second heading: "Mired in scandals and circled by critics, can the beloved British broadcaster be saved from itself?"

The 6 page TIME article is fascinating on two accounts. Firstly it details in intriguing detail how the British Broadcasting Corporation is locked in an epic crisis of its own making. It shows how even venerable broadcasters - as big and as credible as the BBC - are being undone and besieged by and within a new world media order.

There's a second reason the TIME cover article of the current issue is utterly fascinating and is a must-read for every single TV executive in South Africa working in our local TV industry.

Substitute the word BBC for SABC, remove every time you see the words "beloved", "credible", "storied" and "objective" and the eye-opening report could to a large degree be an insider's tell-all about the struggling South African Broadcasting Corporation.

The latest crisis afflicting the BBC is very much something of a much larger, massive erosion of accountability, public trust, actual management and executives who can read, TV executives who actually studied and know television and radio, and actual wisdom and expertise which has been systematically dismantled and broken down at the SABC over the past two decades.

Here's some quotes from inside the TIME magazine article, about the BBC. See how arrestingly applicable it is to the SABC:

"There used to be a sense of people with wisdom and experience to make judgement calls."

"Management has compounded these historical failures with a spectacular volley of mistakes and misjudgements that has raised elemental questions not just about how the BBC is funded but about whether it has entirely lost its way."

"...its existential struggle could be dismissed as a case study in management bloat and the scleroris of large organisations."

"...an organisation that got into trouble at least in part because of a lack of direction from the top."

"...a staff demoralised not only by several years of restructuring..."

"Two factors will determine the shape in which the BBC emerges. The first is the changing nature of the environment in which it operates. And the second is the extent to which the battered giant can overcome its cumbersome management processes and institutional smugness to effect reforms from within."

"A larger problem is a management culture that a former senior executive describes as 'basically a fuedal kingdom. There was a king, the director general, and there were barons, but the barons never really respected the king. All they would do is fight for their particular corner, and they would bypass the king and do what they wanted until they were brought into line."
on 12:19:00 AM