REVIEW. Room 9 on SABC1 is a drawn-out, bland, boring, been-there, tedious show with a hackneyed Harkness and smoke. A lot of smoke. 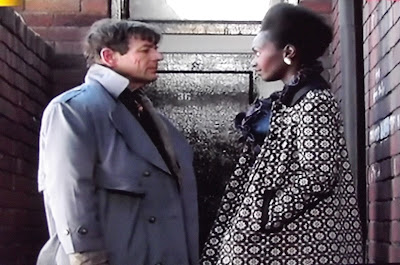 The dreadfully drawn-out, urban-awful science fiction sadness which is Room 9 on SABC1, is another good example of how simply bad most local South African television drama series are and how low-budget, embarrassing TV keeps getting made for the masses. Bad and sparse set? Dark and stormy night needed? Cue the smoke machine.

The only creativity in Room 9, written and directed by Darrell Roodt, is blatantly taking the name Captain Harkness from the BBC's Torchwood and copying it onto this embarrassing public television production. After the laughable opener episode maybe an upcoming episode deals with cloning.

By 21:10, 40 minutes into the first episode of this Home Pictures 1 Production and Dv8 Films with Urban Brew Studios, and with no screener beforehand to TV critics who had to watch the episode as it was actually broadcast on SABC1, I found myself yawning.

Lots of exposition, drawn-out scenes, little plot development, and that little person always accompanying Leon Schuster made me long for an episode of Khumbul'ekhaya. At least that has some drama.

A blind woman using a computer screen? Police sirens blaring when there's no emergency? And what's up with all the smoke machine use like a Michael Jackson Thriller video? No enough cardboard to build actual three dimensional sets?

The futuro-fashion of Zethu Dlomo who plays Alice Kunene and which reminds of Michele Burger's wardrobe in the similarly toned Charlie Jade shows promise; as does the acting of Anthony Oseyemi as the Nigerian character Solomon Onyegu. Suave, well-dressed and well-spoken, perhaps this character should have been the lead? Hopefully there's more backstory to this character in future episodes.

The panderingly bad shots of David Butler as Gabriel Harkness circling so-called satanists as hooded figures and then lunging at them are so laughably bad that Room 9 comes across as an afternoon kids show where everything is so minimal, you won't be surprised to see a hand puppet pop up as a "real" character.

The mood music in Room 9's opening episode, especially at the beginning was good. (Unfortunately) it follows after the opening sequence of spooling celluloid which reminds of the Special Assignment original opening theme and look a few years ago.
I almost expected to see Max du Preez after that.
on 11:20:00 PM