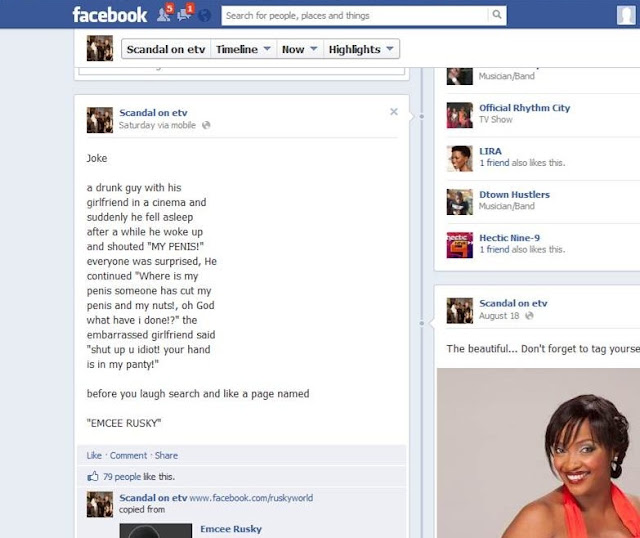 You're reading it here first (besides Facebook of course)

e.tv is suddenly raising a lot of eyebrows with the below-the-belt joke e.tv's Scandal! posted on Facebook - but e.tv just told me its a fake account and not the real Scandal!'s.

The real -life drama started when this naughty joke was posted on Facebook - complete with words "penis", "nuts" and "panty".

Whatever the case, this seems bad for e.tv's reputation and for its soap. I've reached out to e.tv for a possible response as to what on earth happened here.

e.tv responded quickly and tells me the account is not real. "It's not the real Scandal! account. It's not us. Scandal! is different on Facebook, it's not this one."

"It has come to our attention that a fake Scandal! Facebook page has been created. The updates posted on the fake account are not shared or endorsed by the Channel or the Production Company (Ochre media). We have reported the fake page and are exploring ways to shut it down.  The official fan page for the soapie is “etvScandal”.  In the meantime, we would like to encourage fans to use the “etvScandal” facebook page to get the latest information about the soapie."
on 1:08:00 PM