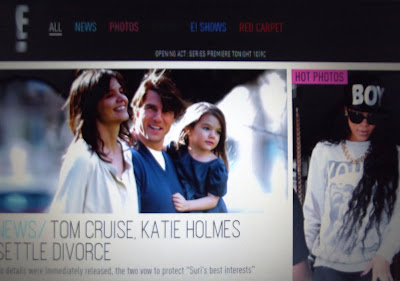 E! Entertainment (DStv 124) just unveiled its new eonline.com website which has been under construction for the past eight months and features a new modular block format in which advertising and paid-for content are integrated with editorial content.

The new website for E! Entertainment precedes the upcoming change of the entertainment channel's new on-air look  which South African viewers will see happening from sometime from September.

Ted Casablanca, E! Entertainment's gossip writer of The Awful Truth is gone and removed from the new design, with Ted Casablanca who has reportedly - although not confirmed - been fired after 20 years for writing a naughty posting.

An E! Entertainment representative in South Africa responded very fast and confirmed to me that E! Entertainment's new look, logo and tagline will debut on the network and digital platforms in the United States and Canada today. Internationally the refresh will begin in September.
on 11:47:00 PM