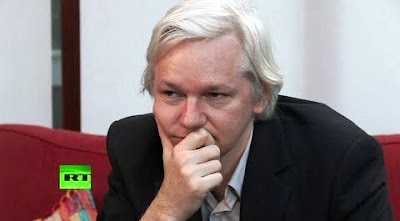 Today on RT (DStv 405) Julian Assange will be talking to the two leading intellectuals Noam Chomsky and Tariq Ali in his weekly talk show The Julian Assange Show (quietly rebranded from the original The World Tomorrow) at 13:30 (South African time).

Both will be talking about the future of global movements such as the Arab Spring and the Occupy Wall Street movement in today's 11th episode.

These intellectuals share their views about the history of change, how changes are made in general, how movements are created and kept alive and share insights into where things are going now.

The discussion today about the world's future comes at a time when Julian Assange is facing a lot of uncertainty of his own.

After the Supreme Court of the United Kingdom denied his appeal of extradition to Sweden, the Wikileaks founder has sought refuge at the Ecuadorian Embassy in London where he has been awaiting a decision on political asylum, or a guarantee that Sweden won't extradite him to the United States on Wikileaks-related charges.
on 9:13:00 AM