Is Isha Sesay on CNN International keeping CNN NewsCenter and adding another daily show or what exactly is going on? 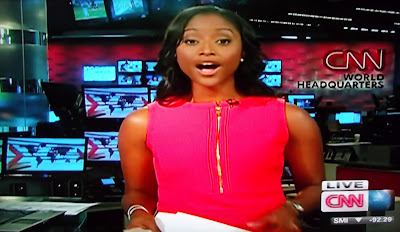 I've been struggling for longer than a week to get any kind of coherent answer or perspective from CNN International's PR company in South Africa who appears clueless and disinterested.

Last week CNN in America announced that Isha Sesay will become one of the new presenters of a new show Evening Express on HLN, a sister channel of CNN in America. I asked but had to wait for longer than a week for any answer from CNN International's PR company in South Africa. I had to ask again this week after an answer wasn't forthcoming.

Earlier this week I was eventually told: "Isha is not moving to a new show".

Well, since the CNN press release in America already said she definitely is going to be on a new show, the answer from the PR company who is getting paid to communicate these things, seems odd and is insufficient to make clear what exactly is happening with Isha Sesay. UPDATE: In a very clear answer now, CNN International says Isha Sesay will be doing both daily weekday shows.

While its not impossible for one person to do two shows per day, its not that easy a feat to juggle. Anderson Cooper from AC360 on CNN International also does his weekday show as well as an hour of his syndicated talk show. Will Isha Sesay remain the face of CNN NewsCenter and add Evening Express in America? How does one person juggle that timewise and adequately prepare for two different TV shows per day?

I've again asked for a more clarifying answer, and if I get anything, I'll try to shed more light on this.

CNN International's primetime line-up for South African viewers meanwhile is currently one of the best its been in years. With Quest Means Business at 20:00, Amanpour at 21:00, CNN NewsCenter at 21:30, Connect the World with Becky Anderson at 22:00, a repeat of Amanpour at 23:00 and World Sport at 23:00, CNN International is now a news junkie in Africa's dream on weeknights.

The offering is incredibly strong and after a few weeks have held up - meaning CNN International is back to being about global news in primetime, comprehensively covered and less emphasis on fluff.

The various primetime programmes are strong on news, flows and complements each other perfectly. The brilliant Amanpour at just the right time for South African and African viewers is the best single TV news programme on any international news channel in my opinion as a TV critic and a journalist and it's daily appointment television for me. I enjoy the amazing take of a compendium of news, interviews and context (and on a daily basis!) tremendously. It's very well done.

The new CNN NewsCenter is also strong and well put together with little fluff (although you probably have to include the stunt guy jumping out of a plane without a parachute and landing on boxes).
on 8:30:00 PM