BREAKING. Anthony Bourdain moving from the Travel Channel to CNN and CNN International for a new travel and food lifestyle show. 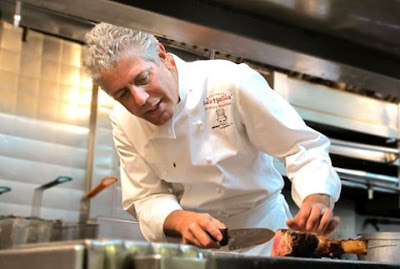 The celebrity chef Anthony Bourdain is leaving the Travel Channel (DStv ccc) to join CNN and CNN International (DStv 401) where he will be appearing from 2013 over weekends as the global news channel is ramping upits weekend lifestyle programming.

Anthony Bourdain will move to CNN International in a new, still-untitled programme which will "be shot on location and examine cultures from around the world through their food and dining and travel rituals".

Anthony Bourdain's new show will also be produced by Zero Point Zero Productions which did his No Reservations show fomr the Travel Channel. The first season is for 8 episodes and the plan is for at least two seasons of 8 episodes each.

"Anthony Bourdain, whose reporting has taken him from the culinary capitals of Europe, Asia and North and South America to such historically war-torn or isolated regions as Vietnam, Mozambique, Uzbekistan and Romania, will also offer commentary on other CNN programs and platforms, domestically and internationally, providing insights into current events and debates around food and health and other cultural conversations," says CNN in a press statement.

"I'm really looking forward to coming over to CNN. I think the world is going to get a whole lot bigger for me," says Anthony Bourdain in the statement. "I hope that old fans and new ones will be excited about what's coming down the road."
on 11:40:00 PM