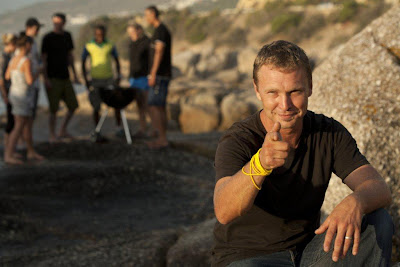 A new local reality cooking show is coming to South African television with Ultimate Braai Master which will start on SABC3 in September with Justin Bonello and South Africans who would now be able to enter for the show.

The original reality TV cooking competition will start on SABC3 on 13 September with 15 teams of two contestants each consisting of a Braai Master and a Braai Buddy. In Ultimate Braai Master contestants will battle it out over 52 days in a culinary adventure that includes 13 location based challenges over 8 000km.

Justin Bonello already has 5 seasons of Cooked under his belt as well as four best-selling cookbooks and says he wants to produce a local reality TV show that will ''showcase the beauty, diversity, unique flavours and local delicacies that characterise some of South Africa's best off-the-beaten track locations''.

''But Ultimate Braai Master isn't going to be a picnic,” he says. ''To earn The Ultimate Braai Master title, teams will have to sign up for a 52 day road trip, during which time they'll be expected to occasionally catch their own food, source their ingredients under the toughest conditions, and cook to a standard of culinary excellence that will thrill our judges and raise the bar on the kinds of meals that can be produced on an open fire.''

Ultimate Braai Master is open to all those food lovers who consider themselves above average cooks, aged 18 years and older, with a valid driver's license. Contestants will be able to enter online at http://www.ultimatebraaimaster.com/ from Monday 26 March until Monday 27 April.

Shortlisted contestants will be put through their paces at three regional auditions in Durban, Cape Town and Johannesburg in May, where Justin Bonello together with the Ultimate Braai Master judges will select the final 15 teams.

Filming for Ultimate Braai Master will start in July and the finale of the show starting in September will be shown on SABC3 on 6 December.
on 8:43:00 AM