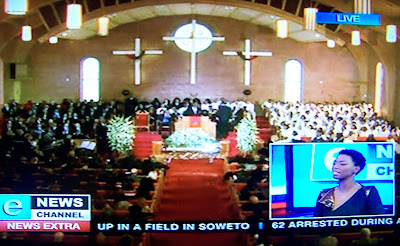 The eNews Channel (DStv 403) had the most atrociously awful live coverage of the Whitney Houston funeral of all the available news channels in South Africa carrying the funeral live today, out of a list including BBC World News, CNN International, Sky News, MSNBC, Fox News Channel and euronews.

While all the news channels had advisories about the live coverage coming on Saturday, South Africa's eNews Channel didn't know or care to tell the press or viewers.

Live coverage started but the eNews Channel who invited South African singer Lira to the studio kept interrupting the funeral and speakers by asking Lira questions and talking over the service, which is not why viewers would have turned in. The other news channels like CNN International and Sky News which had commentators and celebrity experts, deftly waited for shorter silent moments in between to talk.

Lira left the eNews Channel studios at 20:10. By that time - when anchor Belinda Moses took over at 20:00 - the eNews Channel which cut away for lots of commercials, news headlines and schizophrenically cutting to ews and interrupting the funeral. When Whitney Houston's musical mentor Clive Davis spoke, viewers couldn't hear anything, Belinda Moses kept talking and studio guest Bongani Madondo (a writer for Rolling Stone magazine in South Africa) kept blabbing. They talked again while Stevie Wonder sang.

The eNews Channel's live Whitney Houston funeral coverage came across as extremely amateur, sub par compared to the slickly produced offerings on the other news channels, and grossly disrespectful. It's strange and negligent that the channel would first off not have told it would be preempting its usual Saturday coverage for Whitney Houston's funeral - and then do it so badly - especially since it's so easy for viewers to flip the switch and watch a far superior broadcast on adjacent TV news channels.

While Sky News was commercial free, the eNews Channel would suddenly interrupt with wholly inappropriate Clientele ''I was in a car crash'' legal services infomercials.

Although all the new channels used the same single-camera Associated Press video feed (the only news organisation and single video feed allowed in the church) CNN International had the best and most crisp video image and best colour saturation. Once again the eNews Channel's video feed was the worst of all the available channels (euronews was second worst).
on 10:52:00 PM