BREAKING. From Nolly to nothing: TopTV abruptly loses two channels as Hi Nolly and One Music disappear from pay TV operator's bouquet. 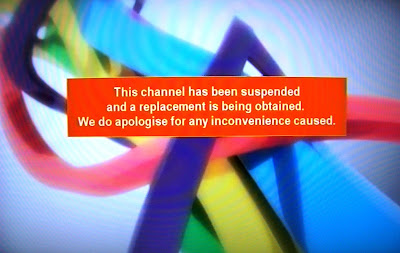 TopTV giveth and TopTV taketh away: Without any warning, any explanation, and not telling the press, two TopTV channels, Hi Nolly (TopTV 120) and One Music (TopTV 506) have both abruptly disappeared - with TopTV only displaying an on-screen message on both channels saying ''this channel has been suspended''.

TopTV subscribers are completely in the dark about what happened to the channels, with TopTV only telling subscribers on both the Hi Nolly and One Music channels that ''a replacement is being obtained''. ''We apologise for any inconveniece caused''.

With South Africa's Consumer Protection Act in full force, TopTV subscribers will be able to demand a refund under section 61 of the act because the service promised is not being delivered. One Music used to play ''the best of African and international hits'' while Hi Nolly showed Nigerian and African movies and entertainment shows.

Neither Hi Nolly or One Music will likely be back on-air soon. Both channels originate from Lagos in Nigeria, run by Entertainment Highway's satellite TV service, HiTV, which came to an abrupt operations end.

HiTV's offices was locked and sealed by Nigerian police allegedly due to billions in unpaid debt this week. Guaranty Trust Bank in Nigeria is demanding payment from HiTV on a loan fascility. HiTV staff are locked out and all HiTV servers - responsible for the channels on it such as Hi Holly and One Music - are shut down.

Responding Wednesday morning to a media enquiry made by TV with Thinus regarding the missing channels, TopTV says ''we have been informed that the channel operator, Hi Media was placed under liquidation order''.

TopTV says this resulted in a ''discontinuance of Hi Media's broadcasting operations and as a result Top TV's service with regard to these two channels will be temporarily discontinued. We have also been told that Hi Media is challenging the liquidation order and the case will be heard in Lagos on Friday. If the court rules in HiMedia's favour there could be a resumption in the broadcasting services.''

TopTV says ''such events are uncertainties and TopTV needs to develop a more definite solution to this situation. Consequently we are seeking replacement channels - however this is a process that will take at least 60 days due to regulatory process that need to be followed.''
on 1:57:00 AM