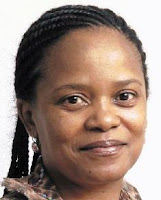 Thelma Melk, the long serving company secretary of the SABC is out; suspended because of allegations of ''poor work performance'' and taking unapproved leave.

Business Day broke the news of Thelma Melk's suspension at the public broadcaster. Sources confirm to me that Thelma Melk was told on Friday that's she's being suspended.

Thelma Melk has been linked to controversy at the SABC before where she was an international jetsetter before the broadcaster clamped down. Besides other international locales, Thelma Melk jetted to Los Angeles, first class, on a so-called ''content purchasing visit'' with a ticket that cost the SABC R175 000 and which made waves in 2009.
on 7:17:00 PM