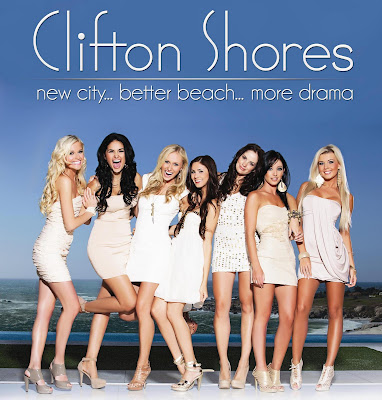 Insiders have been buzzing about the reality show Clifton Shores currently being filmed in South Africa's wealthiest and coolest commune: Clifton.

I've been trying for two months to get the scoop (just to get scooped) and made MTV Networks Africa crazy (its not an MTV show) with enquiries about the little disparate facts and clues I found and tried to put together since I saw Clive Morris Productions filming a promo against a green screen. Now finally there's more to this show of 13 episodes with Hisham Abed and Chris Roland as the directors with a crew of about 25.

''It's like MTV's Laguna Beach,'' says the Cape Town publicist Andrew Farr, about the show - an unscripted drama - that follows the Cape Town exploits of seven girls (four from Las Vegas in America) who work for Quinton van der Burgh's events and marketing company Quintessential. Cameras follow them as they have to organize and execute events across the city but there's also the guys they meet, boyfriend drama as all kinds of personal struggles. The show doesn't have a specific broadcaster yet and wasn't commissioned - but is produced upfront and will most likely be shown to prospective buyers at the annual Mipcom TV market soon where the world's TV buyers congregate every year to look at what interesting new international TV show pickings there are.

Clifton Shores will most likely wrap at the end of April since filming started in earnest in January Genna Lewis, Clifton Shores content producer tells me. ''We follow the girls all over Cape Town. There's a lot of personal drama and we try to stay on top of it all.''

Why Clifton? Well, what's more elusively exclusive that the wealthiest suburb in South Africa and the playground of the country's rich and famous. ''Basically Clifton - and that is what Clifton Shores will capture – speaks to a certain lifestyle that's very aspirational. Clifton Shores follows the story of real young women who are facing everyday issues within their own lives but against a magnificently beautiful backdrop and a world not a lot of people have access to.''
on 12:39:00 PM