Video tapes? Really? Why broadcasters still use a system of video cassettes to play out TV shows. 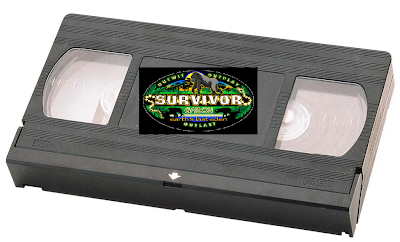 Why is SABC3, or any South African broadcaster, still using video cassettes? Why don't they all just ''beam'' shows in digitally and then broadcast them like what M-Net does from time to time with Desperate Housewives and American Idol?

Shock, but more disbelief and a mix of astounding surprise were the reaction from TV with Thinus readers when I broke the news RIGHT HERE yesterday that SABC3 will have to preempt the premiere broadcast of Survivor Gabon because of the non-delivery of the video cassette due to the snow storms in Europe. Video tapes? Really? Like VHS? Is this the Middle Ages? Yes. Yes. And actually, Betamax.

TV channels in South Africa as well as elsewhere in the world who have, or are switching over to digital delivery, processing, and play out broadcasting systems are still - and will for some time to come - use video tapes for the same reason that we drive petroleum-fuelled vehicles and don't yet live in that much-heralded paperless society. It's because vast interlocking, interdependent and global systems exist regarding programme distribution that's slow to change and who's very existence has been built upon (and has a completely natural self-preserving, self-sustaining interest in maintaining the status quo).

The reasons why broadcasters are still largely making use of video tapes are legio (and even when shows are received digitally through satellite its still first recorded to removal media before play out)and if you click on READ MORE below, I will tell you the ''surprising'' and not often known reasons why.

The contract (1)
Currently, as it has been for basically decades, the distribution contract for the right to show a specific program by a broadcaster stipulates that it doesn't own the content. The broadcaster only buys a certain window during which to show it and an agreement to show it between a specific timeframe. The (international) distributor ''gives'' and supplies the content on video cassettes. Its branded, indexed and easily catalogued for play out by the broadcaster who can often make mistakes when they just receive a digital feed.
Case in point: M-Net who used digital satellite feeds to get shows and just this year screwed up American Idol both in the content and formatting, the Emmy Awards in the formatting, Desperate Housewives in the aspect ratio formatting.
Distributors feel more secure if they've sent content physically and broadcasters feel more secure if they've received content physically and know they ''have it'' to show it.

The contract (2)
It's not really strictly enforced but that content - because broadcasters only buy the rights and don't own a specific show - actually have to go back. Of course broadcaster can make copies, and yes, they do. But the ''original'' copies received from the distributor are supposed to be send back to the distributor. Legally distributors want to send a TV property as a tangible product and then receive back a tangible product. Think of it like a library where you take out a book and have to return it. The same system applies for broadcasters. Video tapes for content still works better in terms of keeping track of it all than beaming etherial content around.

Bandwidth and capacity restrictions
MultiChoice and M-Net have some capacity and indeed are doing it, e.tv has a bit now and the SABC has basically . . . nothing. We're not living in the brave new world yet where broadcasters can use digital link-ups to draw its complete internationl TV inventory for its schedule from satellites. Both from a cost perspective, available bandwidth perspective, technology and physical infrastructure perspective it doesn't make economical sense for broadcasters to do it this way.
You also need technicians who know how to do it (human resources). Where there is capacity it usually goes to news and current affairs to lend news and actuality shows some razmataz. And it happens mostly live and is over and nobody has to rework the content later. And did I mention time? Downloading that TV show takes some time and of course resource allocation by the broadcaster. Its much easier sitting back and just opening the box when tapes arrive.

Capability
Remember that the distributor is often not a/the broadcaster. They deal primarily with syndicating TV content and selling the broadcasting rights. They often don't have the technology or satellites or satellite capacity to beam digital versions. When it does happen, it means the distributor had to find or use (mostly they do have, but it requires intricate logistics) a business unit or affiliate in the conglomerate to do a link-up. Much easier therefore to just use the system of sending video tapes. (Especially when its an older show like Survivor Gabon that's part of the available content library and isn't a hot property and something that the distributor actually wants to even do effort with, since a show has passed the prime of its pop culture currency in America.)

Capacity (2)
Often contracts are signed and broadcasters immediately want to put shows on. (Indeed, not really the SABC but it does happen from time to time.) Ironically it would (obviously) work better to digitally link-up and download a show through satellite if you've signed the contract and want to broadcast the show as soon as possible. But, between the contract finally being signed off, and the show then having to go on the air, there is no satellite capacity and human resources ''budgeted'' to actually get it in this way. So in a very counter-intuitive, yet the tried-and-trusted way, the distributor then quickly dispatch video tapes to the broadcaster by courier. Kinda messy, kinda confusing, but just how it is.

Scaredy cats
Human and corporate psychology also plays a role as an intangible factor. Companies are scared. People are scared. Although content like TV shows, even on removable media like video cassettes are still very much piracy and duplication prone, the perception from distributors and broadcasters are that digitally sending shows would/is making it even easier. They simply don't feel comfortable linking and beaming their shows, and feel that video tapes as a tangible device couriered from point A to point B are just better.

Digital ''danger''
The video tape is usually as received is usually complete and ''perfect'' regarding the format, and the myriad of final control indicator trinkets, countdown idents and timers, black screen breaks etc. When broadcasters download shows these are often times not in and have to be locally inserted through a new quick-edit of the tape before broadcast. Also ''if you have it, you have it'' - if you lose the digital download you have to start over, if it was coded incorrectly you can mess a bit with it but mostly have to re-request a download again. Video tapes, for now, are still deemed the ''safer'' option.
on 1:48:00 PM