TV MOMENT OF THE WEEK: eNews Channel and AWB make headlines with ''Touch me on my studio'' and saying ''I am not finished with you''.

The eNews Channel (DStv 403) and its Africa 360 current affairs show, hosted by Chris Maroleng, is still making headlines and waves around the world after this live on-air disruption Wednesday.

This TV moment has now been played in TV news bulletins and on TV news networks around the world. It has now been viewed thousands of times on YouTube. There's now even two music remixes - a Mo Circle mix and a very funny Hammertime remix - both on YouTube making fun of it all. 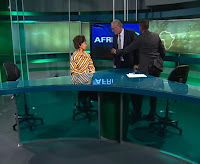 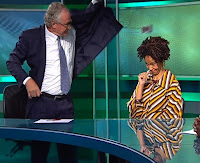 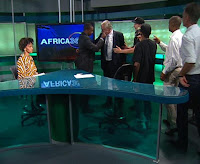 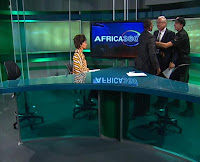 Not since Prince Sifiso Zulu stormed into the SABC's Durban studio on Sunday 25 September, 1994 with a handgun during a live broadcast on TV1 of Freek Robinson and Agenda with IFP leader dr. Mangosothu Buthelezi, have South African TV viewers seen a live TV current affairs show get disrupted like this.
on 4:31:00 PM