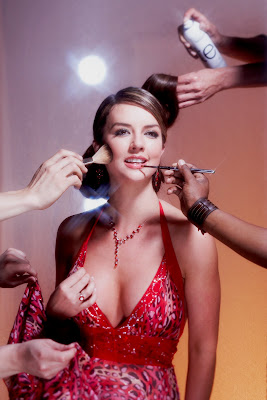 You're reading it here first. I can EXCLUSIVELY reveal that Cindy Nell, Miss SA 2002 and Pasella presenter on SABC2 is a SURVIVOR SA CONTESTANT.

The third season of Survivor SA is currently filming off the coast of Mozambique and Cindy Nell who got married in March, is one of the celebrities who will battle it out in this celeb filled version.

In her newly recorded voicemail on her cellphone she only says ''I'm not available right now'' and gives no time indication of when she would be available again - something most celebs does.

''A man here almost broke his neck when he saw Cindy Nell climb out of the bus,'' a resident of a nearby town told me.

I can PROMISE MUCH MORE DISH on the show, the contestants and gossip around Survivor SA as the week progress. Check back tomorrow for some news on a celeb who was approached for the show, but said NO.
on 7:54:00 AM