BREAKING. Having breakfast with Oprah in South Africa. ALL THE SCOOP! 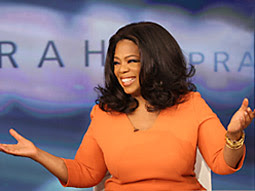 You're reading it here first. I broke the news last month and was first with the scoop that Oprah Winfrey would be in South Africa today to talk to readers of O, The O Magazine as well as advertising execs. And so she was.

I have exceptional, super excellent and credible sources everywhere, and Oprah Winfrey's You Have the Power power breakfast with readers and advertisers this morning is no exception, so here is all the scoop.  The tickets for the readers' event sold out in 4 minutes flat earlier this month. Here's the lovely dish and all the scoop. . . first:

There were several gatecrashers who showed up at the venue anyway, longing to see Oprah and trying to possibly slip into the breakfast at The Wanderers building at The Forum in Bryanston. Security was exceptionally tight but lowkey and professional - as everything Winfrey usually is. No unauthorized people got through and there were no incidents.

For SIMPLY ALL THE DISH IN SUPER DETAIL, click through below! . . .

Pink roses on all the tables. Oprah in a dark orange dress. And she had an inspirational message mostly centered around service and service to others. ''I don't do it for the money. I have enough shoes. I have enough square footage. I continue because I have a deep need inside me to fulfil a calling of service."

Guests at the ad exec breakfast (that was described as ''lovely'') were treated to a full English breakfast, including muffins and toast, then mixed citrus salad, passion fruit syrup, bacon, sausages, mushrooms and tea or coffee. Even the waiters and helpers wore pink.

Oprah told the audience that O, The Oprah Magazine will definitely still continue and that it will be business as usual for the publishing of her magazine. This follows after her statement a few days ago that she will be quitting her talk show in September, 2011 to focus on establishing her OWN TV network.

In her speech of about 15 minutes she said people should not just work, but work with a purpose: to be of service to others. ''The most important thing in your job is how it can be used in service, in a way that does not just serve yourself.''

Oprah got a standing ovation when she step onto the stage. According to sources - in classic O style - she had to calm the audience amidst their spontaneous shrieks of delight, shout-outs and screams.

Also observed: some stole quick glimpses, most simply stared openly at her table while she sat there. ''Many, many people just wanted to see her and just look at her,'' a source told me. ''She left ver quickly afterwards. Whoops - gone. And of course the security was very good, but low key and inobtrusive and professional as everything Oprah,'' I was told.

Everybody didn't get a car but they got a copy of her magazine in their goody bags, an Oprah magazine cookbook and a nice journal (with lines) and self improvement inscriptions pasted on the inside with the old Oprah logo on the outside.

Mostly women attended the Oprah event, although there were some males (lost?) to be seen.

''Nobody was eager to leave,'' says a source. ''People lingered. They loved to be there and be in her presence. They felt positive and it was a sunny day and folks were obviously reluctant to go to work after having had breakfast with Oprah.''
on 4:00:00 PM