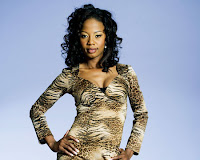 You're reading it here first. Kelly Khumalo has been fired from e.tv's soapie Rhythm City for, as sources tell me ''extremely difficult and unprofessional behaviour on set''.

As I understand, Kelly, who played Sunay since 2008, has been difficult and extremely hard to work with for a VERY LONG TIME. According to sources, the singer also often showed up late.

E.tv doesn't use the word FIRED.

''Since Rhythm City started broadcasting, Kelly Khumalo has never been on a full-time contract. Sunay has appeared as a recurring character based on storyline. Kelly is contracted to fulfill these requirements.''

''Kelly’s current story line and contract came to an end earlier this year. Should the character Sunay, appear again in the soap, I'm sure the producers of the show will contract Kelly.''