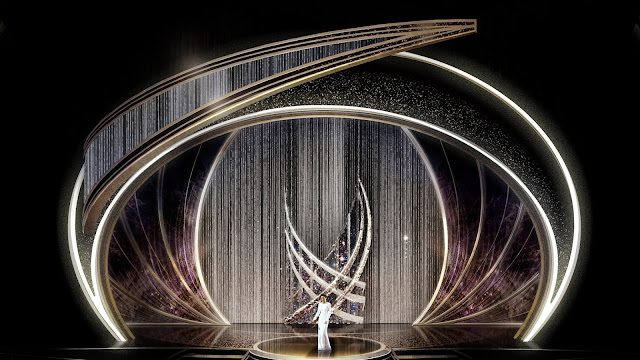 M-Net (DStv 101) has added a half hour Oscars 2020 red carpet special for its prime time schedule on Monday night to intro the 92 Academy Awards with Anele Mdoda who will interview some stars as they make their way into the Dolby Theatre in Los Angeles.

M-Net will also broadcast the awards ceremony as a live simulcast on Monday morning at 03:00 on M-Net Movies (DStv 104). This year the Oscars will be televised live in more than 225 countries and territories worldwide with MultiChoice and M-Net that have the rights for sub-Saharan Africa.

This year's Oscars stage with be a glittering "cyclone" - a Swarovski-covered stage created by Jason Sherwood.

Important to note is that NBCUniversal's E! (DStv 124) for the 5th year in a row will again not have any actual red carpet coverage during the last hour of red carpet arrivals since those rights belong to the ABC network in America that gets exclusive live red carpet access.

Here's your comprehensive TV guide on exactly how, the channels, and the times, where you can watch the show as well as the surrounding red carpet coverage:

Oscars: E!'s Insider Guide
▪ 21:00 Sunday 9 February, E! (DStv 124)
A recorded special counting down to one of Hollywood’s biggest nights spotlighting the biggest names who might make a showing this year on the red carpet.


On the Red Carpet: Oscars 2020 The Arrivals
▪ 23:30 Sunday 9 February, M-Net Movies Premiere (DStv 104) LIVE
The official red carpet coverage broadcast kicks off looking at the fashion as the stars arrive and interviews with the stars.

The Oscars Red Carpet Show
▪ 01:30 Monday 10 February, M-Net Movies Premiere (DStv 104) LIVE
The official red carpet pre-show with presenters Billy Porter, Tamron Hall, model Lily Aldridge and film critic Elvis Mitchell. Beginning at 02:30 when E! must cut away, Ryan Seacrest, for a second year in a row, will switch from E! to join this show as a presenter to cover the last half hour from alongside the red carpet before the ceremony starts.

Red Carpet Rundown: Oscars 2020
▪ 02:30 Monday 10 February, E! (DStv 124) LIVE
Since E! is no longer allowed alongside the actual red carpet at this time, fashion correspondents and experts analyse the looks from the stars who've already arrived for Oscar night with photos and commentary.

92nd Annual Academy Awards
▪ 03:00 Monday 10 February, M-Net Movies Premiere (DStv 104) LIVE
The ceremony from inside the Dolby Theatre. The Oscars will once again be hostless this year for a second consecutive year.

Anele at the Oscars
▪ 21:00 Monday 10 February, M-Net (DStv 101)
A pre-recorded half-hour with Anele Mdoda in Hollywood covering the glitz, glam and excitement of Hollywood's biggest night.

E! News
▪ 10:20 Tuesday 11 February, E! (DStv 124)
Lilliana Vazquez and Scott Tweedie do a special Oscars 2020 lookback episode with news and commentary about this year's ceremony and red carpet coverage. E!'s team of correspondents will do a special Oscars recap with all the insider secrets, surprises, snubs and backstage shockers, plus the biggest fashion risks and hottest after-parties.

Pop of the Morning
▪ 10:50 Tuesday 11 February, E! (DStv 124)
Lilliana Vazquez, Scott Tweedie and Victor Cruz do a special Oscars 2020 edition of the daily talk show looking back at gossip, issues and sharing their insights of this year's ceremony and red carpet.
on 7:37:00 AM