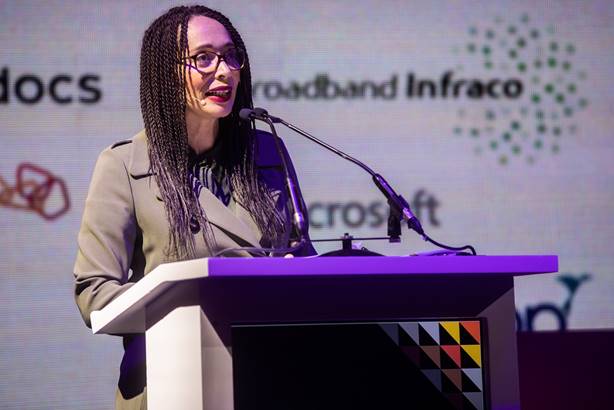 The general entertainment boss of Africa's biggest pay-TV service is calling for a massive stimulus package to be made available for South Africa's TV and film industry to help support local production companies in increasing their output of local films and series and for "a national agenda" to focus on what the local industry wants to achieve.

Yolisa Phahle, MultiChoice CEO for general entertainment, was one of the headliner keynote speakers at the 3-day AfricaCom conference taking place in Cape Town, and said that the next African superhero needs to come from an African production studio, and that South Africa needs to tell the story of its 2019 Rugby World Cup victory before foreign actors do it.

In her speech, Yolisa Phahle stressed the urgency and importance of a massive South African stimulus package to support and expand local film and television production in the country.

"I've seen first-hand how economic success is often correlated with a national focus on arts, culture - and in the case of Hollywood and Bollywood - a thriving film and television industry."

"I’ve also seen how in recent times countries like Mexico, Turkey and Scandinavia have made their mark on the international stage with film and television that has found global audiences and brought great economic success."

"As a South African who lives and breathes the African dream, I know that we can also deliver incredible economic benefits because African storytelling can also find a home in the hearts and minds of global audiences," said Yolisa Phahle, using the new M-Net, HBO and German co-production Trackers as an example of what South Africa's film and television industry can produce.

"Trackers, an African story, is written by a South African writer. It features a South African cast, with local production crew and just this series created jobs for more than 1000 people and at the same time attracted millions of rands of foreign investment spent in SA."

"Now imagine 100 productions of this nature across Africa and the power of job creation becomes real. It’s a fantastic example of how we can leverage our collective capabilities – technical, digital and creative - for great success and in so doing, take African stories to the world."

"It’s living proof of what can be done if we leverage the best local talent, the latest film-making techniques and technology, and the abundant great African stories that have been written."

"I know we can do it - and so do the thousands of creatives who work in the industry - but what we need to make this a reality is a national agenda."

"Lebo M who created the music for the Lion King has spoken many times about the economic value lost to Africa as this movie was made by Disney rather than an African studio.  We’ve all seen the power of Black Panther and again, this is an African superhero."

"Let’s make sure that the next African superhero is created by an African studio and that the taxes and revenues flow back to Africa."

"As South Africa revels in the glory of a 2019 Rugby World Cup rugby victory, it’s worth asking: who’s going to tell the Springboks story? Who’s going to bring Siya Kolisi’s phenomenal life journey to the screen?"

"We’d better hope that it’s South Africans and that we don’t have an African American actor twanging his way through the scrum, or Matt Damon playing the role of Faf du Plessis… No disrespect to Invictus or Morgan Freeman or Matt Damon, but surely, it’s time South Africans brought more of their own stories to the world stage and screen?"

"This can only happen if we see consistent and growing involvement in the South African creative arts by government and the private sector in particular," said Yolisa Phahle.

"The biggest and most influential economies in the world all have strong film and television industries. They are a huge part of their national identity and their content travels the world. Film, in my experience, often has more impact on the national psyche than many politicians. Great stories contribute to democracy, to social cohesion, and to personal development."

"A massive stimulus package for the South African film industry would undoubtedly speed up transformation, build our economy, and strengthen the national consciousness at the same time."
on 11:02:00 AM