SABC fires Thato Sikwane on Tuesday from Metro FM on the same day as DJ Fresh suddenly pops up on news channel Newzroom Afrika on DStv. 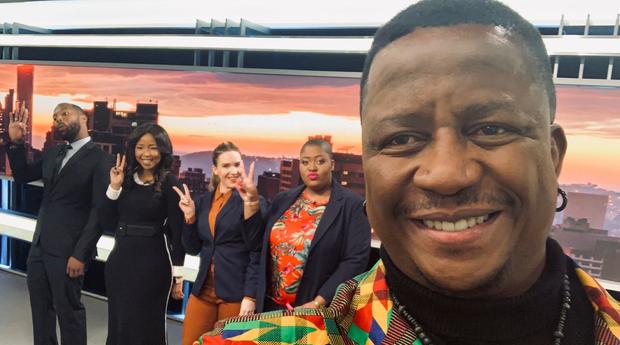 The SABC fired the suspended DJ Fresh - real name Thato Sikwane - on Tuesday with immediate effect, dumping him from the South African public broadcaster's Metro FM radio station and slamming him for lying on the same day as he suddenly showed up on the morning show of the South African TV news channel Newzroom Afrika (DStv 405).

DJ Fresh who presented Metro FM's Fresh Breakfast show was benched in mid-June 2019 after refusing to apologise and after complaints with the Broadcasting Complaints Commission of South Africa (BCCSA), following his use of the Zulu swear word "msunery" in response to a radio listener. Another Metro FM listener was told to "stop tweeting from his ars*".

After an internal fight between DJ Fresh and the SABC, he suddenly popped up on Newzroom Afrika's Breaking Dawn programme on Tuesday, alongside Sizwe Dhlomo, Gugu Mhlungu, Natasha Thorp and Tumi Kgasoe.

On Tuesday afternoon the SABC in a statement said it has dumped DJ Fresh from Metro FM with immediate effect and that he had lied about apologising for his filthy on-air rant and for which the SABC was found guilty by the BCCSA.

On 8 July DJ Fresh in a statement said that a meeting took place where he and the SABC agreed that he would apologise unreservedly.

The SABC said it fired DJ Fresh after "his usage of offensive language on-air, resulting in the SABC being found guilty and sanctioned by the Broadcasting Complaints Commission of South Africa (BCCSA) for contravention of clause 6 of the BCCSA’s Code of Conduct".

"In addition, his conduct brought the SABC into disrepute". The SABC said that DJ Fresh was offered an opportunity to "remedy his contractual breaches" but failed and refused to do so.

"This conduct resulted in the irretrievable breakdown of the trust relations between the SABC and himself. In a letter dated 28 June 2019, Thato Sikwane’s lawyers further stated that 'it is our client’s instruction that he must either return to work immediately, alternatively, that upon his commencement on 15 July 2019, it must be emphatically understood that no apology will be tendered".

The SABC said the letter from DJ Fresh's legal team was contrary to his statement that was released on Monday 8 July.

Nada Wotshela, the SABC's radio boss, said that "the SABC continues to be committed to ensuring sound governance and internal controls irrespective of an employee’s or freelancer’s position".

"We are grateful to the team who have held the fort during this period" and that "when an independent contractor breaches a contract of engagement, the SABC will invoke the provisions of the same contract in line with consequence management."

On 9 July DJ Fresh in a statement responding to being fired by the SABC said he will start a new job on 1 August and that the SABC has been "a burdensome monkey on his back" which he has been freed from.

"I have no regrets about how this worked out, because I firmly believed that fair labour practice is about correction more than it is about being grossly punitive. As a principle, I would sooner walk away from a job (any job) than accept such abuse."

"To those I offended with the use of the word msunery, I apologise unreservedly, and will do better next time. I start a brand new show and chapter on 1 August 2019," DJ Fresh said.
on 8:47:00 PM