DStv SHOWCASE SEPTEMBER 2017: DStv Now service, seeing 'fantastic growth', keeps adding TV channels; will be rolled out to all DStv subscribers before the end of 2017. 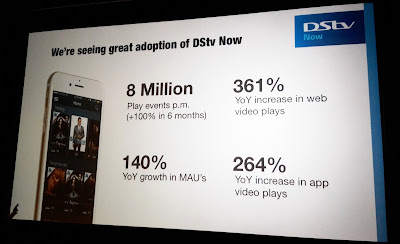 MultiChoice's DStv Now service that is seeing "fantastic growth" according to the pay-TV operator's digital boss, keeps adding DStv TV channels as it edges ever closer to a true over-the-top (OTT) mirror of the traditional direct-to-home (DTH) DStv satellite service, with DStv Now that will be made available to all DStv subscribers before the end of the year.

By bringing Naspers' subscription video-on-demand (SVOD) streaming service Showmax into the fold under DStv Digital Media, MultiChoice also wants to bring the best of what Showmax has done to the past two years, to the DStv Now service.

"The last 8 months we've seen massive uptake in play events. We now sit at 8 million 'play events' per month - that's an increase of about 100% in the last 6 months."

"This tells us that these behaviours of consumers are real, they're starting to translate into the second-screen viewing and this on-demand viewing which bodes well for a product like DStv Now."

"There's been a 361% growth in year-on-year web video plays. The web is still our biggest platform for usage. We put that down to the fact that your browser screen is a bigger screen than your mobile phone, and people want to watch their content on bigger screens."

"So it's our biggest platform but we see impressive growth in the app space of the DStv Now product as well - 264% year-on-year growth in DStv Now app video plays." 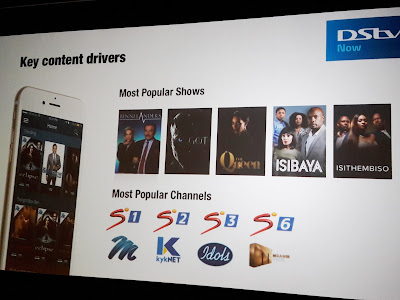 "Our local dramas and soaps feature really well on DStv Now, they're our most popular DStv On Demand titles and then sport from a live streaming perspective - everybody tunes in on a Saturday or a Friday morning if there's SuperRugby to watch on a SuperSport channel." 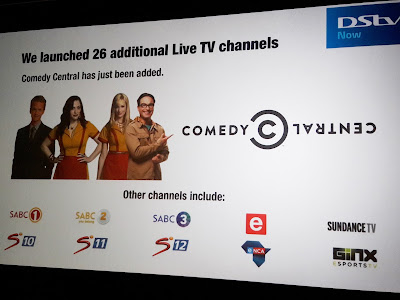 "We also launched an additional 26 TV channels into the service. I'm happy to announce today that Comedy Central (DStv 122) is the latest addition to that channel line-up," said Graeme Cummings.

"The free-to-air channels are proving very popular, the remaining sports channels that we didn't have on DStv Now we've now added, as well as the e.tv and eNCA channels, SundanceTV and Ginx."

"Really the goal is to get as much coverage, and get all of our channels onto the platform, and we're going through that. It's a journey that we're on, there's rights clearances that we go through. But we've made good progress in the last couple of months."

"We also announced that we would open up casting and enable Airplay and Chromecast and I'm happy to say that that is now done. We've had some good feedback from some of our early adopters. And again, this speaks to that need from the audience to want to be able to play their content on bigger screens," said Graeme Cummings.

"We've also made some improvements to connecting your DStv Explora. The bigger part of our base still receives their content through their DStv Explora decoder and we're on a journey to get as many of those Exploras connected to the internet as possible."

"One of the things that we've introduced is a new WiFi Connector, and we've also made massive improvements to the on-screen set-up, so if you plug this WiFi Connector into your DStv Explora, you basically walk through a set of steps on your Explora interface and we will scan the network and allow you to put your password in, and connect that device."

"Those users who have connected their Explora, the most active amongst them, we seen them downloading more than 20 shows a month, which we think is good progress," said Graeme Cummings. 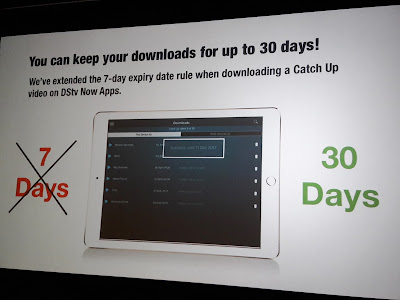 "We've also made some improvements to the download duration, so previously, anyone who was downloading their content to mobile devices, had 7 days to press play on that content. We've extended that to 30 days now."

"This is a big win for those users going on holiday. They may be downloading a bunch of kids shows; they're not going to expire after a week. You're going to have 30 days to press play."

"The restriction once you've pressed play is still in place - and that a studio restriction. It's a 48 hour window [you get to watch]." 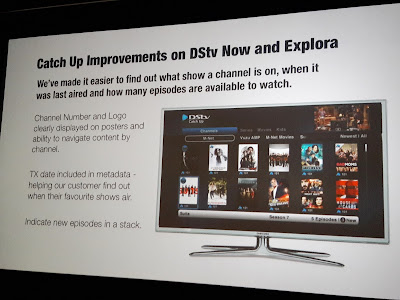 "We've also made some improvements to the interfaces and content discovery on the Explora and DStv Now," said Graeme Cummings. 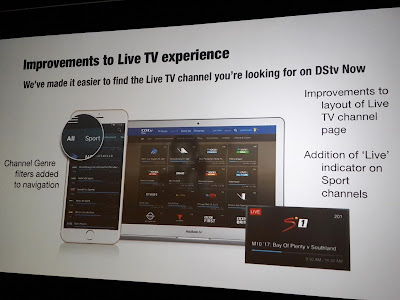 "So we've added some meta-data onto the screens, things like channel numbers and logos that will tell you this is an M-Net show or a kykNET show. We've added the TX date into the meta-data so we'll tell you now that Suits airs on this particular day and this time."

"We've also got the NEW indicator. So previously if you were interested in Suits, you would have to go into that stack to see how many episodes were unwatched. I think that was annoying and some of the feedback we got from users was 'How do we make navigation a little bit easier?"

"So we've got that little indicator that we've introduced that will tell you how many episodes in that stack are unwatched which we think is going to make life a little bit easier."

"Then we've made a couple of improvements to our live TV experience."

"As we've added all of these extra channels over the last two years - I think we're streaming 90 channels to DStv Premium customers now - it's become more difficult to navigate all these channels."

"So if you interested in news channels,you pretty much have to scroll three or four pages down to get to the news channels or the sports channels. So we've introduced some genre navigation into the app and the website. We've also changed the layout on that page [from 2 column to 4 column layout]," said Graeme Cummings. 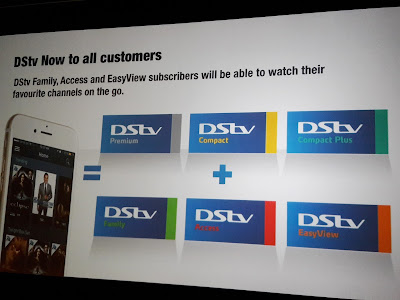 DStv Now will also be opened up to all DStv subscribers said Graeme Cummings to include "DStv Family, DStv Access and DStv EasyView customers."

"Once we've done that, pretty much every DStv customer will have access to their content on the go."

MultiChoice will do this before the end of 2017. 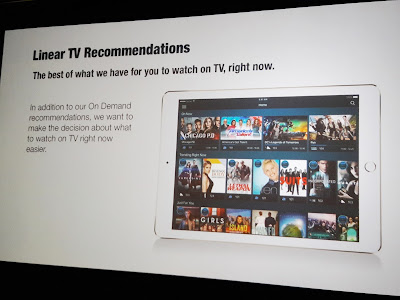 "We're also making improvements to live TV recommendations. One of the things we've realised is, this DStv Now application is an on-demand, on-the-go type experience, but a lot of that consumption is actually linear consumption."

"It's people tuning in for sporting events, or the Idols event on a Sunday night and what we need to start doing is surfacing some of those linear recommendations in an on-demand way," said Graeme Cummings.

"Previously we had all of these recommendation strips in the application that could surface the most popular content in an on-demand world. We want to do the same thing from a linear perspective."

"So if you open up the application on a Friday night for example, yes, we're going to have all your on-demand recommendations, but we also want to be able to tell you that this particular episode is going to air in 5 minutes, do you want to watch it? Do you want to stream it live?"

DStv Now is also working on a "watchlist" recommendation feature that will be implemented, and helping viewers to find recently watched shows. 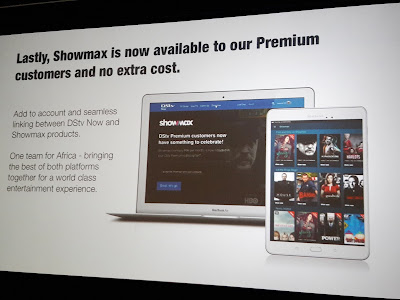 "We're looking at the best of what Showmax has been able to bring to their customer base, we're looking at some of the  features and innovations that we've created in the DStv Now space, and what we're trying to do is really to bring the best of both worlds to our customers going forward."

"It's really a conscious effort on our part to make sure that what Showmax has invested in and built over the last two years, and what DStv Now has been able to do, we want to bring those two worlds together for the sake of our customers and give them the best of everything," said Graeme Cummings.
on 3:03:00 PM