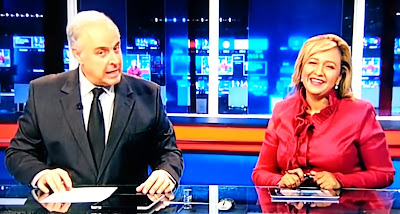 It's over for the best co-anchor TV news duo on South African television with Jeremy Maggs and Iman Rappetti on eNCA not just leaving their seats behind the NewsNight oval glass desk and next to each other but also getting out of prime time after they've both had enough.

The dismantling of how eNCA (DStv 403) used to look and what it used to be continues with the co-anchors of its flagship nightly news broadcast, Jeremy Maggs and Iman Rappetti both leaving NewsNight by the end of next month.

The widely respected news duo have been eNCA's co-joined prime time faces for the past five years, with their imminent big exit being the latest visible eNCA on-air disruption, part of the ongoing sea change taking place behind-the-scenes at the eMedia Investment run channel.

eNCA (DStv 403) hasn't named an anchor replacement or replacements for the nightly two and a half hour show done from e.tv's Hyde Park newsplex in Johannesburg in which Jeremy Maggs and Iman Rappetti showed and shared great personal on-air rapport.

The beloved duo's on-air chemistry in the age of 24-hour TV news channels was exceptionally rare - especially for often-dull and dry, cookie cutter South African television news broadcasts and harkened back to the heydey of when M-Net's Carte Blanche with co-hosts Derek Watts and Ruda Landman would successfully banter with each other in a way that drew viewers more than into just a show, but into a news conversation.

"Both Jeremy and Iman have been key to the success of eNCA," says Mapi Mhlangu, eNCA news director. "We thank them for their loyalty, hard work and brilliance in bringing powerful news stories to our screens. This is a big change for the channel and our viewers, but also an opportunity to showcase talent in our newsroom and beyond".

Jeremy Maggs, the former Who Wants to be a Millionaire? SA host, who anchored NewsNight since its debut on eNCA 9 years ago, asked to be moved to an earlier timeslot on the channel.

Jeremy Maggs will be anchoring the lunchtime show Newsday from May that used to be done from Cape Town for years before eNCA management abruptly downsized the newsblock's operation by firing staff and moving the show to Johannesburg since November 2016.

Jeremy Maggs will also continue to do his marketing, media and advertising magazine show Maggs on Media broadcast on Sundays on eNCA.

Iman Rappetti who started out in earlier eNCA timeslots before landing the plum prime time timeslot is exiting eNCA after 11 years to get out of night time for family reasons. 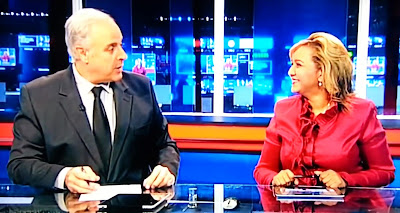 While still the most polished of the three South African TV news channels and boasting the highest viewership under TV news channels on MultiChoice's DStv satellite pay-TV platform, eNCA has been battered the past two years as it scaled down its once lofty news ambitions while it dramatically cut back on current affairs programming, abandoned its attempts at first-hand Africa coverage, shed news staff and reduced its on-air hours of live shows.

Although Jeremy Maggs and Iman Rappetti the past few years often no longer co-anchored together, with both taking solo turns on several weeknights and both abandoning Friday nights on eNCA, NewsNight, despite its faults, remained the best produced general nightly news show on South African television.

eNCA's NewsNight anchor changes come as the struggling Gupta-owned, Infinity Media's ANN7 (DStv 405) rolls along with an unsteady and ever-changing revolving door of prime time anchors, and as the beleaguered SABC's SABC News (DStv 404) channel lost its prime time co-anchor Vabakshnee Chetty-Miller in January this year next to Peter Ndoro after she emigrated to America following the birth of her first child and maternity leave.

"It has been a heady, tough, rewarding, crazy ride," says Iman Rappetti. "Thank you for the gifts of professionalism, a platform to shine and unwavering support. The decision to leave is not an easy one but I need to put my family first."

Anton Harber, eNCA editor-in-chief says "Iman has contributed enormously to our success and is part of our channel's history. We are very sad to see her go".

Jeremy Maggs says that "after anchoring well over 1 000 editions of NewsNight it's high time I pass on the baton to a new team and get home a little earlier in the evening".

"I've been in discussion with the channel about this move for the past year and management has been both understanding and sensitive to my need for a change. I want to pay special tribute to Iman, my co-host for the past five years. Every night on-air together has been a treat".
on 8:58:00 AM