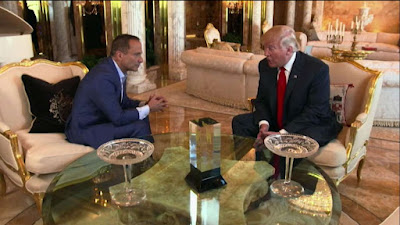 FOX News Channel (StarSat 261) has picked up the once-off special OBJECTified that was broadcast in November 2016 as a new 10-episode series that will be shown on Fox News later in 2017 with Harvey Levin touring American celebrities' home as they talk about objects that hold special meaning for them.

OBJECTified on FOX News will be broadcast on Fridays later in 2017, and comes after the TV special that Harvey Levin did with now American president Donald Trump in his gilded Trump Towers in New York.

In the show newsmakers and celebrities will tell their life stories through their personal items.

"The OBJECTified special presented on Fox News exceeded our expectations, so we're thrilled to continue working with Harvey Levin and his talented team of producers on this new series," says Sharri Berg, the Fox News senior vice president of news operations.

"What I  love about the show is that it's a different way of telling a life story, and it's relatable to anyone who watches," says Harvey Levin.

"Everyone keeps stuff that means something to them, and when you start probing what the objects mean to you, what was going on in your life at the time, they can unlock the story of who you are today."

OBJECTified will be produced by Harvey Levin Productions in association with Telepictures.
on 10:05:00 PM