BREAKING. eNCA abruptly cancels Meet the Media with Eusebius McKaiser without any explanation; says 'the show has served its purpose'. 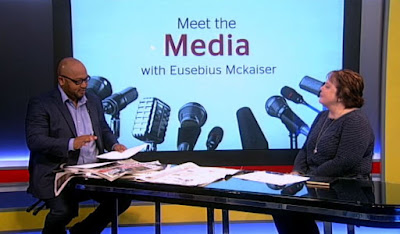 It cannot be that it happened because he dared to wear a doek, but eNCA (DStv 403) has abruptly decided to cancel its well-received new local weekly media review show, Meet the Media with Eusebius McKaiser - without any explanation as to why, saying "the show has served its purpose".

The Sunday morning, Hyde Park studio set media overview show that started a few months ago has abruptly been dumped by eNCA where Anton Harber is editor-in-chief, in a move seen as further denting the news channel's already horrific track-record with culling what's left of its current affairs programming slate.

In a terse statement about the abrupt cancellation of Meet the Media, eNCA simply says the show has "ended its current season on eNCA. In the new year, eNCA will be exploring new concepts for their programming to align with 2017's political calendar. eNCA looks forward to working with Eusebius on new projects in 2017".

eNCA was asked why it decided to cancel Meet the Media and why eNCA conceptualised and put a show on the air for just a few months if it didn't believe in the show.

"As indicated in the release we are conceptualising new ideas for the channel in 2017 and these will be announced before the end of February," says Mapi Mhlangu, eNCA news director in response to a media enquiry from TVwithThinus.

"We feel the show has served its purpose for the period intended. We feel there is a better way to use Eusebius' skills on our channel in the future".

Meet the Media was birthed during an extremely difficult year for electronic news gathering in South Africa that saw censorship from the SABC's TV news division, public broadcasting TV journalists who got crucified for trying to do their jobs, as well as the most journalists being fired in one year collectively at ANN7 (DStv 405), SABC News and eNCA - with internal controversy inside their newsrooms and several public protests in 2016 at the doors of each of the news outlets.

In just a few months Meet the Media brought a new and soothing panacea to a battered South African journalism community - a place where reflection and introspection about local media and journalism issues could breathe.

While Media Monitor on Sundays with Alicia Jali on SABC News (DStv 404) blatantly ignores certain hot potato media issues it doesn't want to highlight or discuss and while the controversial SABC boss Hlaudi Motsoeneng in 2016 banned the showing and discussion of newspapers and even the mentioning of newspaper headlines and stories on SABC television and radio, Meet the Media weekly rejoiced, celebrated and showed not just newspaper front pages but the varied journalists and editors behind it.

Besides talking about the week's big news and South African newspaper stories, looking at news biases and journalism challenges within the South African press and media sphere, Eusebius McKaiser and Meet the Media made an authentic and deeply meaningful effort to do weekly, focused media discussions.

These ran the gamut from things like LGBT and faith issues, to political journalism, consumer and economics journalism, sport journalism, talk radio, newsroom juniorisation, lack of news gathering resources and the challenges faced by community journalism.

Talking to real electronic and print journalists and giving them face and airtime - from the biggest outlets and publications to the smallest community radio stations - Eusebius McKaiser and Meet the Media highlighted various aspects, the different types of journalism and bringing attention to some of the crucial issues the ordinary public consuming news and media are not aware of.

Not in years on South African television, until Meet the Media did it a few months ago, did viewers see something like an on-air discussion on how journalists covering cases of sexual violence feel themselves, cope, and handle the ethical issues around their reporting.

Meet the Media was quickly as agenda-setting in its nature and turned into can't-miss viewing for media types as it was reflective of exactly how the interconnected cogs of the local media sphere turn.

It's Meet the Media - not Carte Blanche - where the SABC's acting CEO Jimi Matthews who had just quit made his very first - and dramatic - on-air TV appearance.

It's Meet the Media where South African viewers got a glimpse of how truly diverse the country's press and journalism corps is despite the many challenges that still exists regarding transformation and race issues.

Not since the 1990's well-respected Between the Lines on the SABC that was eventually cancelled has South African television truly had an unvarnished and uncensored media navel-gazing show like Meet the Media - one that eNCA abruptly cancelled because "the show has served its purpose".

Together with Carte Blanche on M-Net and the newly added Reliable Sources on CNN International (DStv 401) this year, Meet the Media helped to transform Sunday television into the most meta-media day of the week, now only leaving the more advertising and marketing centric Maggs on Media on eNCA on Sundays.

While it's clear that there wasn't editorial interference into the actual content and discussions taking place inside the weekly half hour of Meet the Media, it's quite possible that Anton Harber, eNCA editors and top executives were rankled to differing degree - if they were watching - by some of the criticism levelled against eNCA itself in a few episodes.

The criticism however ironically served to only strengthen viewer perception about the credibility of Meet the Media to really get to grips with real media issues.

Some episodes of Meet the Media didn't single out eNCA specifically, but did include criticism of the eMedia Investments news channel - although the criticism came more in a way of searching for answers about the "why" of it and by example, looking for solutions.

Instances of where eNCA came in for criticism on eNCA itself through Meet the Media the past few months included it's lack of comprehensive coverage during the tertiary #FeesMustFall protests and its lack of aptly places field journalists outside major cities, juniorisation of the newsroom, how commercial broadcasting issues affect editorial decisions, as well as eNCA's shoddy use of off-the-mark Ipsos polling in the run-up to the municipal elections that created wrong perceptions with dubious research methodology that were not disclosed to viewers.

In the same vein Meet the Media also unintentionally served as a media showcase for things like eNCA's newsroom diversity, with its now last episode including Matuba Mahlatjie as a panelist who is a black male gay sangoma working inside the eNCA newsroom.
on 2:09:00 PM