SABC again at war with itself as new - and now suspended - SABC CEO Frans Matlala fights back against his suspension and exposes shocking lapses of corporate governance. 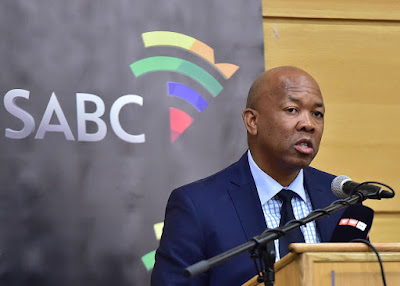 The beleaguered and pathologically ill SABC is once again at war. With itself.

Barely four months after finally appointing its next CEO - the embattled South African Broadcasting Corporation's 9th since 2009 - Frans Matlala is now out of his seat and fighting against the SABC, battling the SABC over his suspension and exposing rot and shocking alleged lapses of corporate governance at the public broadcaster.

Through his lawyer, Joe Mothibi of Norton Rose Fulbright, Frans Matlala wrote to the SABC on 17 November demanding that the SABC reinstate him and immediately lift his shocking suspension by this Tuesday.

If this doesn't happen, Frans Matlala plans to take the SABC to the High Court.

Frans Matlala's legal representation told the SABC that the public broadcaster did not follow legal process to suddenly suspend him.

"Our client views your conduct to be unreasonable, unlawful and not in the best interest of the SABC," Frans Matlala's lawyer told the SABC.

Lacking any transparency over the reasons for the SABC top boss' suspension, the SABC which is in the business of communication and is ostensibly supposed to be a public broadcaster, is refusing to say why yet another SABC CEO has abruptly been suspended.

Now Frans Matlala has become the next SABC CEO, similar to several in the recent past few years, to not only be suspended, but to fight back against the SABC once again being damaged and torn by revelations denting its already tattered image as a public broadcaster in the eyes of ordinary South Africans.

While the SABC's famously matricless chief operating officer (COO) Hlaudi Motsoeneng has not been suspended after almost two years since the Public Protector's scathing report implicating him in gross maladministration and abuse of power, Frans Matlala got barred from SABC doors after just four months.

Frans Matlala claims that he was helping Treasury who asked his help with an investigation into the shocking R40 million new SABC studio ordered by Hlaudi Motsoeneng that was never put out to tender.

The new SABC studio of R39 380 000 excluding VAT was quickly constructed for use of Rugby World Cup coverage and for use by the SABC News (DStv 404) channel to do news coverage.

Hlaudi Motsoeneng - currently himself the subject of an upcoming disciplinary hearing and who last month went on a "voluntary leave of absence" without being suspended - admitted that the studio contract never went out to tender as it's supposed to.

According to Frans Matlala, the SABC's chairperson Obert Mbulaheni Maguvhe ordered him on 11 November to stop helping Treasury with the investigation into the SABC studio procurement process.

In another bombshell relevation, Frans Matlala is directly criticising the SABC, saying the process to appoint the attorneys of Werksmans Attorneys to act in the disciplinary hearing of Hlaudi Motsoeneng is flawed. Again, no comment from the SABC's Kaizer Kganyago asked about this.

Frans Matlala says he was given no chance to make any representation before he was abruptly served his suspension letter, and was suspended after the controversial minister of communications, Faith Muthambi, gave the greenlight.

As previous suspended and then fired SABC board members earlier this year has said, Frans Matlala reiterates that the SABC board does not have a quorum to suspend him or to start disciplinary proceedings against him - the unstable SABC board is gutted and has been rocked by several resignations and firings directly done and influenced through Faith Muthambi.

The SABC's spokesperson Kaizer Kgangayo, asked if this is a correct allegation, didn't respond.

Frans Matlala says he wrote directly to president Jacob Zuma to apologise for the huge embarrassment of the SABC earlier this month when the SABC's Twitter feed wrote "WHAT.THE.F-!!!" after reports over a R4 billion Zuma jet to be procured for the South African president.

Frans Matlala says SABC policy and his contract states he as SABC CEO is the main point of contact between the public broadcaster and the government.

Yet his suspension includes a charge that he was allegedly "not authorised" to be in contact with Jacob Zuma.

The SABC was asked if it can please explain why there seems to be this discrepancy between what Frans Matlala's contract and SABC policy states, and why Frans Matlala would be charged in his suspension for doing something he is allowed, and supposed, to do.

With the now fracturous relationship between Frans Matlala and the SABC and the collateral damage once again being inflicted on the battered SABC brand, it's not clear whether the suspended CEO who had previously been a consultant for the SABC, will remain - or for how long.

With a clearly damaged relationship, and given what has been happening with multiple SABC CEO's in the past, it's likely that the environment and relationship between the dysfunctional SABC top executive and SABC board and Frans Matlala has now suddenly become too toxic for him to really return and serve out the remainder of his contract.

The SABC, lurching from crisis to crisis, just posted a R401 million loss in its latest financial report, doesn't have an on-site COO and sits with 6 vacant seats on the SABC board which haven't been filled for months.

The latest row between the SABC and it's own suspended CEO makes clear exactly how gutted and (once-again) completely rudderless South Africa's public broadcaster is in a massive storm.
on 9:38:00 AM